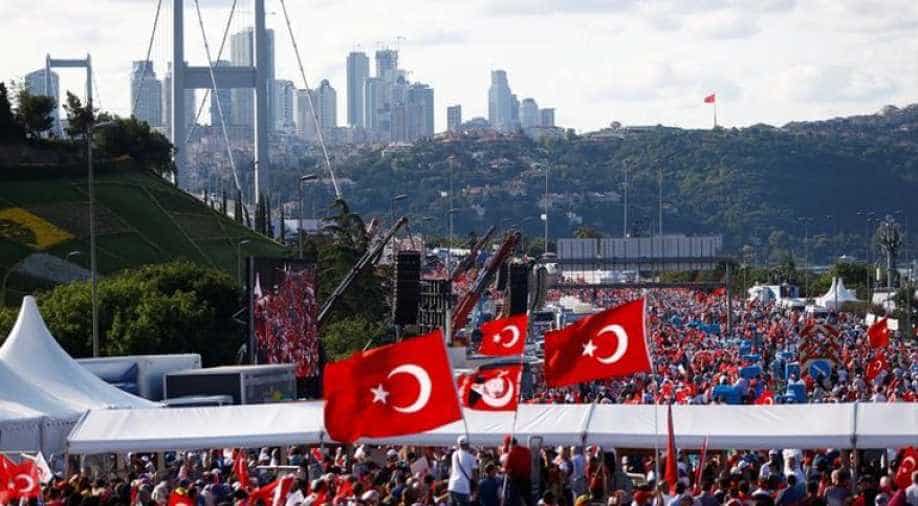 People wave Turkey's national flags as they arrive to attend a ceremony marking the first anniversary of the attempted coup at the Bosphorus Bridge in Istanbul on July 15, 2017. Photograph:( Reuters )

Turkey on Saturday marked one year since the defeat of the failed coup bid with mass nationwide rallies and a stern warning by President Recep Tayyip Erdogan to "chop off the heads" of traitors.

The authorities have declared July 15 an annual national holiday of "democracy and unity", billing the foiling of the putsch as a historic victory of Turkish democracy.

In an intense programme, Erdogan attended a special session of parliament in Ankara, spoke to a mass rally in Istanbul and was set to return to the capital for more events before dawn.

Speaking to a rally of hundreds of thousands by the bridge across the Bosphorus in Istanbul that was the centre of much of the fighting, Erdogan warned that Turkey was mulling reintroducing capital punishment.

"First of all we will chop off the heads of those traitors," Erdogan said, reaffirming he would sign any passed by parliament bill on resuming executions.

Erdogan also said the suspects being tried over the failed coup should wear uniform clothing like the notorious orange jumpsuits used at US military prison at Guantanamo Bay.

"When they appear in court, let's make them appear in uniform suits like in Guantanamo," Erdogan said to cheers, before unveiling a memorial to the victims.

Many supporters carried the Turkish flag while others brandished pictures of the "martyrs" who died defeating the coup. A sea of people stretched from the bridge, which has since been renamed Bridge of the Martyrs of July 15.

Supporters chanted "we are soldiers of Tayyip (Erdogan)", with some even brandishing nooses in a symbol of their support for the death penalty.

Across Turkey, people across Turkey will take part in "democracy watches", rallies commemorating how people poured out into the streets to defeat the coup bid.

'No price on independence'

Two hundred and forty nine people, not including the plotters, were killed when a disgruntled faction of the army sent tanks into the streets and war planes into the sky in a bid to overthrow Erdogan after one-and-a-half decades in power.

But they were thwarted within hours as the authorities regrouped and people poured into the streets in support of Erdogan, who blamed followers of his ally-turned-nemesis, the US-based preacher Fethullah Gulen.

"We paid a price... but there is no price for the independence and future we obtained in return for that sacrifice," said Erdogan.

In the wake of the failed coup bid, authorities embarked on the biggest purge in Turkey's history, arresting 50,000 people and sacking almost three times as many. Erdogan also shored up his position by winning a referendum on enhancing his powers earlier this year.

In the latest dismissals, another 7,563 police, soldiers and other state employees were fired late Friday under the state of emergency that has been in place since July 20 last year.

Turkey's opposition put political disputes aside on the night of the putsch but the scale of the purge has intensified political divisions.

The celebrations come less than a week after the head of the Republican People's Party (CHP) Kemal Kilicdaroglu held the largest opposition rally in Turkey in years, pushing for "justice".

"Over the last year, the judicial proceedings... moved outside the framework of the law," Kilicdaroglu told the special session of parliament.

He also called for full clarity over what happened on the night of July 15, with questions still remaining over when the authorities first found out an uprising was afoot.

"The details need to be made clear in the name of the martyrs and the heroes," he said.

But Erdogan slammed as an "immorality" opposition claims of a "controlled coup" which the authorities had known about in advance and then taken advantage of.

Gulen has always denied involvement and in a new statement Friday said the accusations were "baseless, politically motivated slanders" and slammed a "witch hunt" of Erdogan's critics.

The scale of Saturday's nationwide commemorations is aimed at etching July 15, 2016 into the minds of Turks as a key date in the history of the modern state.

Giant posters designed by the presidency have sprung up across billboards in Istanbul and Ankara showing gaudy paintings that portray the key events of the coup night with the slogan "the epic of July 15".

Public transport was free in Istanbul and Ankara over the weekend while mobile operator Turkcell has sent text messages to clients promising them a free extra gigabyte of data from July 15.

Illuminated anti-coup slogans have been hung between the minarets of some of Istanbul's greatest Ottoman mosques.

Erdogan will later return to Ankara to deliver a speech in front of parliament before unveiling a giant monument to those killed -- showing people holding up the Turkish star and crescent -- outside his palace.