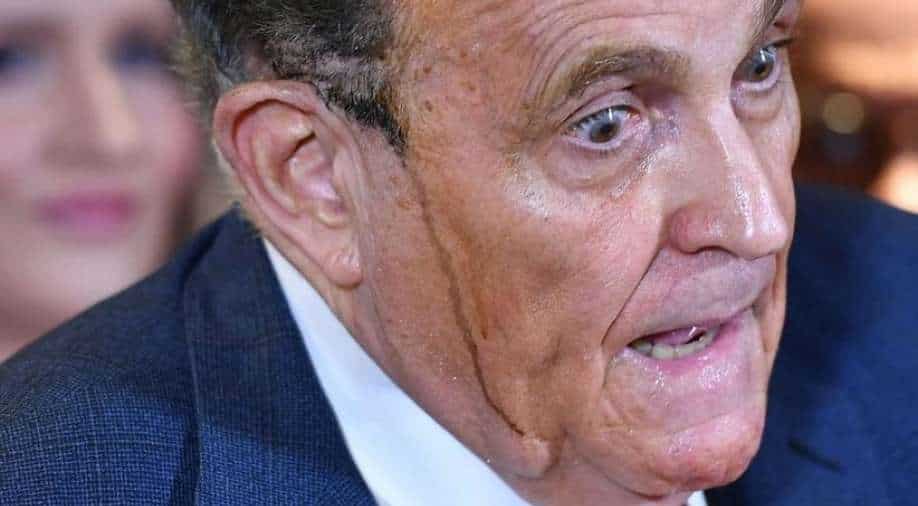 This incident sparked a wave of memes across social media platforms.

Donald Trump’s legal point man Rudy Giuliani gave a news conference to talk about the status of Trump's loss in US elections, but all people could focus on was the fact that his profuse sweating was causing his hair dye to run down his face.

Streaks of what appeared to be the former New York City mayor's hair dye or makeup ran down the side of his face, amusing social media users.

This incident sparked a wave of memes across social media platforms.

I see Rudy Giuliani is having a meltdown. Literally.#SurrenderDorothy pic.twitter.com/ZtYMtIyBIX

Ask yourself have ever seen Rudy Giuliani and the Baron Harkonnen in the same room? 🤔 pic.twitter.com/wgKGYUK672

Apart from this makeup malfunction, Giuliani and his legal team alleged they have evidence of mass, coordinated voter fraud, is that despite such claims, they told reporters they can’t provide any evidence of them at this time.

At the news conference on Thursday, Giuliani said he planned to file more lawsuits and that Democrats had engaged in a "national conspiracy" to manipulate vote totals, although he admitted he did not have any evidence.

Other members of the legal team floated a theory involving Venezuela and George Soros, a bogeyman of conservatives, although they said they would probably not pursue it in court.

Giuliani said accounts of suspicious activity would ultimately overturn the election, which Biden won nationwide by 5.9 million votes. Some of those accounts have already been thrown out of court.

"We cannot allow these crooks - because that`s what they are - to steal this election. They elected Donald Trump. They didn`t elect Joe Biden," Giuliani said.

Giuliani`s agitated performance, featuring rivulets of hair dye running down his face, was widely mocked by Democrats. Others expressed alarm.

"That press conference was the most dangerous 1hr 45 minutes of television in American history," tweeted Christopher Krebs, who headed up the US government`s efforts to combat election disinformation until he was fired by Trump earlier this week.