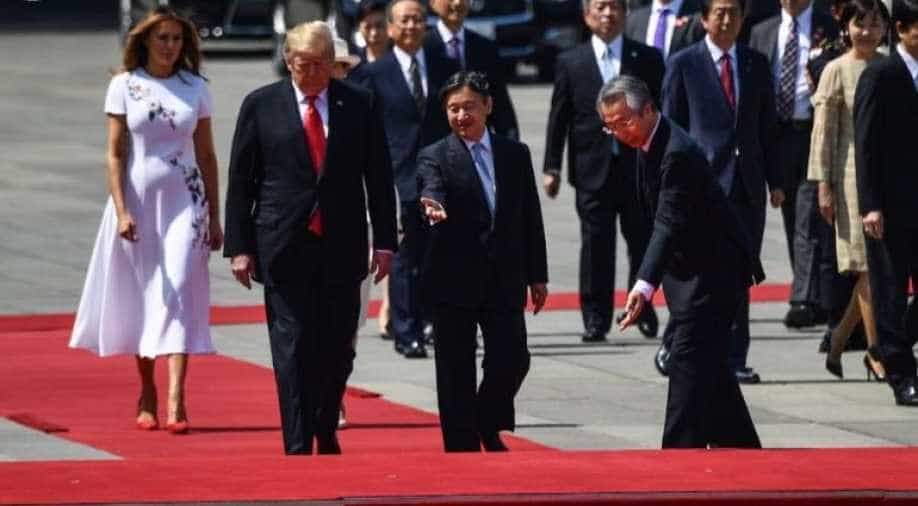 The palace visit in the morning, followed by a royal banquet in the evening, was the main event in a feel-good trip that started Saturday and has seen Abe and Trump playing golf, eating out, watching sumo and generally enjoying an all-Japanese weekend.

The palace visit in the morning, followed by a royal banquet in the evening, was the main event in a feel-good trip that started Saturday and has seen Abe and Trump playing golf, eating out, watching sumo and generally enjoying an all-Japanese weekend.

Dining with Abe and their wives at a typical Tokyo grill restaurant on Sunday, Trump said he "had a great time" and was looking forward to meeting Naruhito, who took the Chrysanthemum Throne only three weeks ago, after his father stepped down in the first abdication in two centuries.

"Tomorrow is really the main event -- a very important event in the history of Japan. It's over 200 years since something like this has happened. So it's a great honour to be representing the United States," Trump said.

After calling on Naruhito in the morning, Trump and his avowed close friend Abe will meet for summit talks and have lunch, before holding a press conference.

On Sunday, they grinned for a selfie and praised each other's golf game. Before the dinner, Abe also accompanied Trump to a sumo tournament where the US president presented a gigantic trophy, brought from the United States, to the champion wrestler.

Abe hopes those good vibes will spread into talks on trade, military ties, the stumbling efforts to rein in North Korea's nuclear weapons programme, and a growing superpower rivalry between Washington and Beijing.

Within an hour of touching down in Tokyo, Trump railed against what he sees as a trade imbalance between the world's top and third-largest economies and vowed to make the relationship "a little bit more fair".

But on Sunday, Trump struck a softer note, saying that "much" of that deal would wait until Abe faces upper house elections likely in July -- as rumours swirl that the popular prime minister will combine that vote with a snap general election.

With his trade war against China getting bogged down, Trump won't want to rock the boat for his closest Asian ally.

Top Japanese and American trade negotiators spent more than two hours locked in talks on Saturday night but failed to achieve a breakthrough, although the Japanese side said there was more "understanding" between the two sides.

On North Korea, Trump appeared to undercut his own national security advisor, the hawkish John Bolton, by downplaying two recent short-range missile tests by Kim which raised tensions in the region.

"North Korea fired off some small weapons, which disturbed some of my people, and others, but not me," Trump tweeted.

"I have confidence that Chairman Kim will keep his promise to me."

Before Trump landed in Tokyo, Bolton had told reporters there was "no doubt" that the launches contravened UN Security Council resolutions, the first time a senior US administration official has said this.

The issue is bound to come up as the leaders meet families of people abducted by North Korea during the Cold War era to train Pyongyang's spies, an emotive issue in Japan that Abe has pressed Trump to raise in talks with Kim.

The nationalist Abe himself has frequently offered to meet Kim to solve the "abductee problem", as it is known in Japan.

On Tuesday, Trump is expected to address troops at a US base in Japan, highlighting the military alliance between the two allies.

His visit there will underline another big US priority -- arms sales to Japan, which is considering revamping its air force with advanced US F-35 warplanes.