Tribal leaders in Brazil call for legalization of wildcat mining 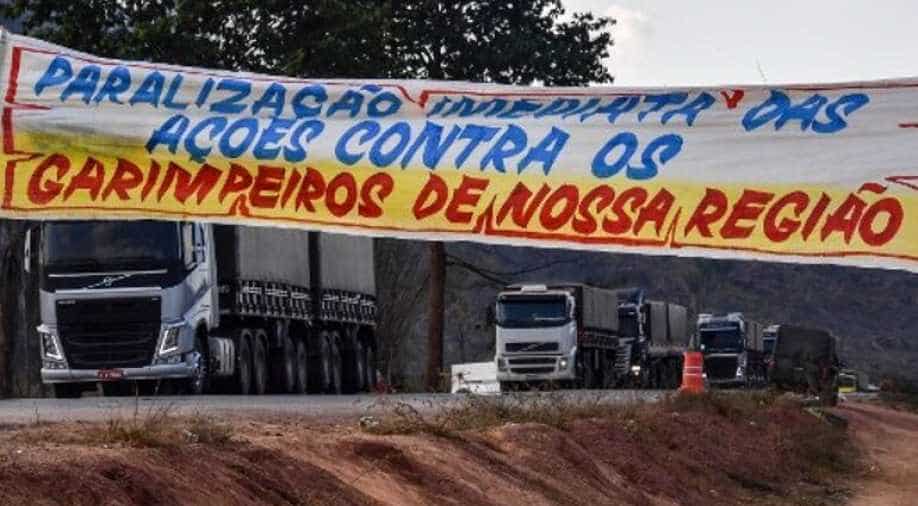 Truckers line up behind a banner reading "Immediate stoppage of actions against garimpeiros of our region" on the BR 163 highway. Photograph:( AFP )

Hundreds of miners and members of the Munduruku tribe in Para state blocked the BR-163 highway at Moraes Almeida town for five days, paralyzing the key transport route and halting hundreds of trucks loaded with soy, corn, and gasoline.

Members of an indigenous tribe in the Amazon in northern Brazil on Friday called for wildcat miners to be allowed to prospect for gold on their land, saying it was a source of income.

Hundreds of miners and members of the Munduruku tribe in Para state blocked the BR-163 highway at Moraes Almeida town for five days, paralyzing the key transport route and halting hundreds of trucks loaded with soy, corn, and gasoline.

The roadblock was lifted Friday afternoon after President Jair Bolsonaro's government agreed to meet with representatives of the protesters on Monday in the capital, Brasilia.

The demonstrators are demanding wildcat miners be allowed to mine on indigenous territory.

"Wildcat miners are the ones who destroy (the environment) the least," Gilson Speare, a gold prospector for the past 12 years, told AFP at the roadblock.

"We just want (the government) to legalize wildcat mining, that's all we want."

Indigenous tribes that permit wildcat mining receive a 10 percent cut of the gold found on their land, mining and indigenous protesters told AFP.

The demonstrators vow to block the highway again if their demands are not met.

Bolsonaro, who came to power in January on a promise to open up the Amazon rainforest to more development, has called for the legalization of wildcat mining, including on indigenous land.

"Wildcat miners are the only ones helping people without jobs," Carlos Augusto Cabace, a Munduruku leader at the protest, told AFP.

But many indigenous people, including members of the Munduruku tribe, are opposed to mining.

They complain that illegal prospectors invade their land, threaten them with violence, pollute rivers and destroy the forest where they mine.

"These Munduruku are sick," Alessandra Korap Munduruku, a tribal leader based in Santarem, told AFP in a WhatsApp message.

"They are being commanded by the wildcat miners who are wiping out Munduruku land."

'We pay the price'

The protest comes as thousands of fires rage in the Amazon rain forest, which has ignited a global outcry and diplomatic spat between Bolsonaro and European leaders critical of his handling of the crisis.

Para has been one of the worst affected states in the Amazon. This week several blazes could be seen near the roadblock and smoke mixed with dust hung in the air.

Thousands of trucks usually ply the BR-163 every day, transporting grain from Sinop in the central west state of Mato Grosso to ports in Miritituba or Santarem in Para.

Many drivers spent several days in the queue that snaked for kilometers along the asphalt highway.

"We have nothing to do with their problems," Miguel Arcanjo, 58, complained to AFP after spending more than two days stuck in Moraes Almeida with his load of corn.

"When you stop the highway, we pay the price," said Charles Leandro de Carvalho, 36.

"If you stop the trucks, you stop Brazil."