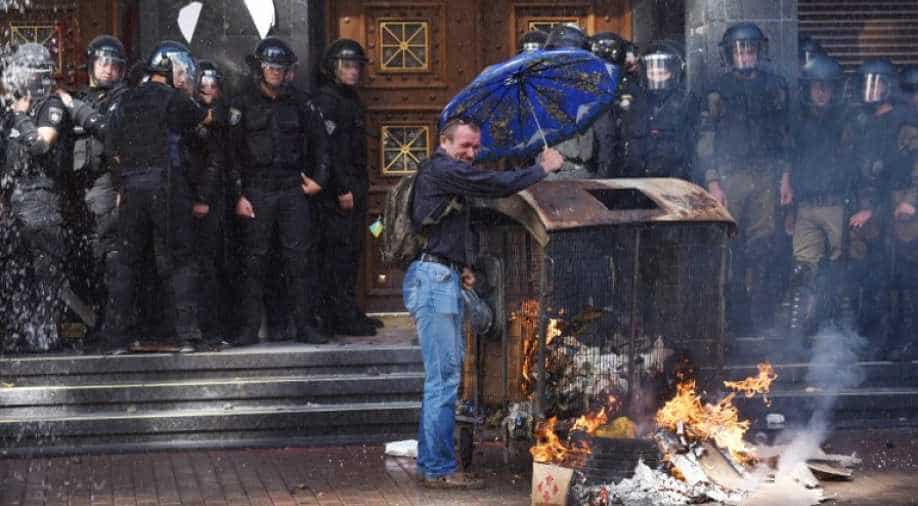 This week Ukrainian, Russian and separatist negotiators agreed on a roadmap that envisages special status for separatist territories

Thousands of demonstrators gathered in central Kiev on Sunday to protest broader autonomy for separatist territories, part of a plan to end a war with Russian-backed fighters.

Protesters chanted "No to surrender!", with some holding placards critical of President Volodymyr Zelensky in the crowd, which police said had swelled to around 10,000 people.

The country's 41-year-old president is gearing up to hold his first summit with Russian strongman Vladimir Putin in an effort to revive a stalled peace process to end the five-year separatist conflict in eastern Ukraine.

This week Ukrainian, Russian and separatist negotiators agreed on a roadmap that envisages special status for separatist territories if they conduct free and fair elections under the Ukrainian constitution.

Zelensky's critics fear that Putin will push the comedian-turned-politician to make damaging concessions in order to retain Moscow's de-facto control of separatist regions in eastern Ukraine.

"We are against a betrayal," protester Sergiy Lezvinsky, 58, told AFP.

"We want to put an end to the occupation, to the decisions that are being fast-tracked".

The provisional agreement of a roadmap was a key condition set by Moscow for a meeting that will be hosted by French President Emmanuel Macron and also involve German Chancellor Angela Merkel.

The plan has been dubbed "the Steinmeier formula", after the former German foreign minister, Frank-Walter Steinmeier, who proposed it.

But many critics say the proposal favours Russia.

Zelensky's predecessor Petro Poroshenko has called it "Putin's formula," claiming it will endorse the Russian annexation of Crimea and Moscow's de-facto control of eastern Ukraine.

He said elections could take place in eastern Ukraine only if Kiev restores control of the country's borders in the east.

In an address to the nation earlier this week Zelensky said he respected the right of Ukrainians to protest but called on people not to "give in to provocations".

He pledged not to betray the country's interests.

The ex-Soviet country of 45 million people has gone through two popular uprisings in two decades and has been mired in a conflict with separatists since 2014.

The conflict - the worst East-West crisis since the end of the Cold War - broke out after Russia annexed Crimea in March, 2014 and has claimed 13,000 lives.