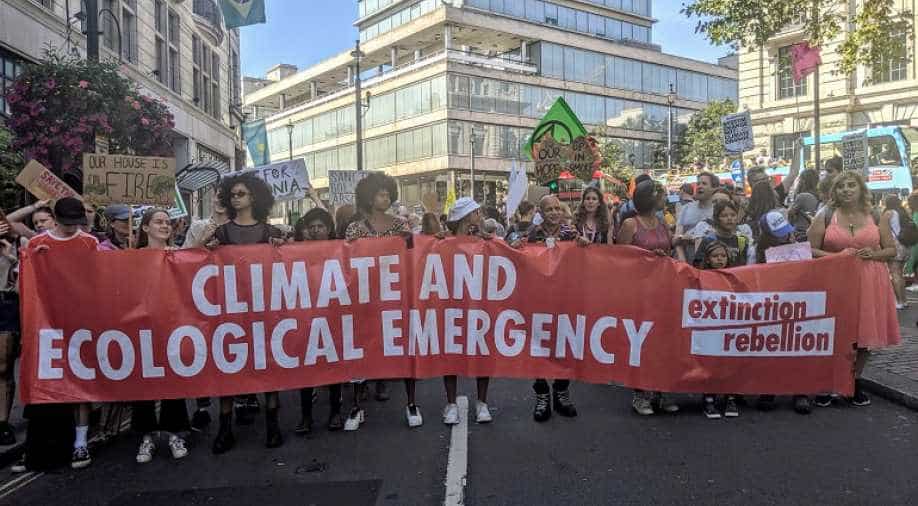 People demonstrate during an Extinction Rebellion protest outside the Brazilian embassy in London, Britain August 23, 2019 in this picture obtained from social media. Photograph:( Reuters )

Thousands protested outside Brazil's embassies across Latin America on Friday calling for great protection for the Amazon amidst raging wildfires.

Brazil shares the Amazon with other Latin American nations such as Peru, Colombia, Venezuela, Ecuador and Bolivia.

Protesters blame Bolsonaro for undermining protection of the world's largest tropical rainforest and turning a blind eye to illegal deforestation by farmers and land grabbers.

The wildfires have sparked international criticism of Bolsonaro's handling of the destruction of the rainforest, which produces more than 20% of the oxygen in the Earth's atmosphere and is considered a vital brake on climate change.

Bolsonaro has vowed to open up the Amazon region to more agriculture and mining, even on indigenous reservations that are seen as the most protected parts of the rainforest.

This week French President Emmanuel Macron and U.N. Secretary General Antonio Guterres expressed concerns about wildfires that are raging in the Amazon, but Brazilian President Jair Bolsonaro has responded angrily to international pressure as meddling.