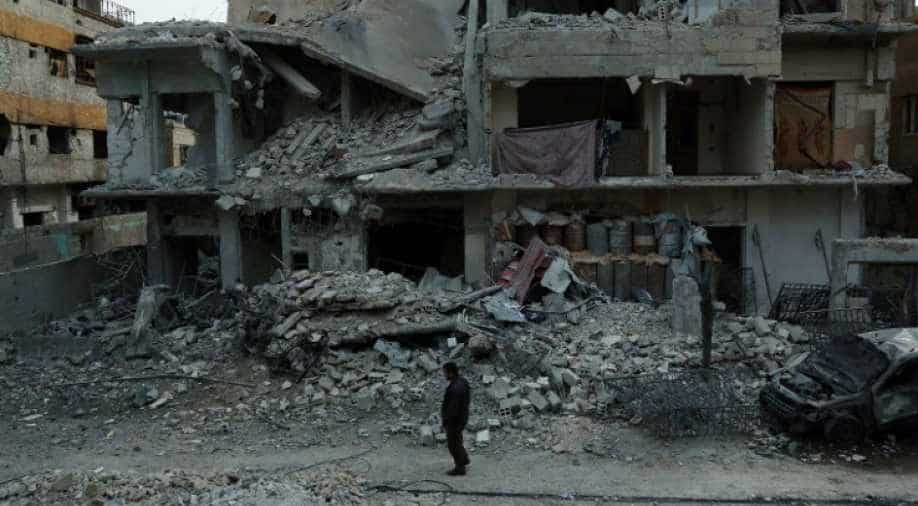 Russia said on Monday it would establish an evacuation corridor and implement a five-hour daily truce to allow people to leave Syria's eastern Ghouta, after a U.N. Security Council resolution demanding a 30-day ceasefire across the entire country.

It appeared to make no mention, however, of allowing relief supplies to enter the territory, where 400,000 people are living under siege and bombardment.

Over the past week, Syria's army and its allies have subjected the rebel-held enclave near Damascus to one of the heaviest bombardments of the seven-year war, killing hundreds.

Eastern Ghouta cannot wait, it is high time to stop this hell on earth,' UN Secretary-General Antonio Guterres told the UN Human Rights Council in Geneva, calling for implementation of a ceasefire

On Sunday, health authorities there said several people had symptoms consistent with chlorine gas exposure. On Monday, rescue workers and a monitoring group said seven small children had been killed by air and artillery strikes in one town.

"Eastern Ghouta cannot wait, it is high time to stop this hell on earth," U.N. Secretary-General Antonio Guterres told the U.N. Human Rights Council in Geneva, calling for implementation of the ceasefire.

Fighting has raged across Syria since Saturday's resolution, as Turkey presses its offensive against a Kurdish militia in Afrin, rival rebel groups fight each other in Idlib and a U.S.-led coalition targets Islamic State in the east..

Russian Defence Minister Sergei Shoigu was cited by the RIA news agency as saying President Vladimir Putin had ordered a ceasefire in eastern Ghouta from 9 a.m. to 2 p.m. each day, and the creation of a "humanitarian corridor".

Major-General Yuri Yevtushenko, head of the Russian peace and reconciliation centre in Syria, said the measures, decided in agreement with Syrian forces, were intended to help civilians leave and to evacuate the sick and wounded.

RIA's report of his remarks made no direct mention of letting relief supplies in, but quoted Yevtushenko accusing militants of "holding hundreds hostage, including women and children, and victimising residents, refusing to allow them to leave".

The International Committee of the Red Cross in Geneva said it welcomed any measure that allowed "those who wish to leave to do so, of their free will", as well as medical evacuations.

But spokeswoman Iolanda Jaquemet said much more was required: "The need remains for humanitarian convoys to move in with vital supplies: medicines, medical supplies, food, material to purify the water. This is a place with up to 400,000 people and humanitarian needs are huge."

Linda Tom, a U.N. humanitarian spokeswoman in Damascus, called for the Council resolution to be fully implemented "so that the U.N. and its partners can deliver humanitarian assistance to those in need, particularly to those in eastern Ghouta".

She said at least 30 people had been killed in Ghouta in the previous 48 hours.

Russia, along with Iran and Shi'ite militias, is a major backer of Syrian President Bashar al-Assad and it joined the war on his side in 2015, helping him claw back important areas.

Mohamad Alloush, political chief of one of eastern Ghouta's biggest rebel factions, said the Syrian army and its allies had launched "a sweeping ground assault" after the U.N. resolution.

Russian Foreign Minister Sergei Lavrov said allegations that the Syrian government was responsible for any chemical attack were aimed at sabotaging the truce.

The Syrian government has consistently denied using chemical weapons in the war, which will soon enter its eighth year having killed hundreds of thousands of people and forced half of Syria's pre-war population of about 23 million from their homes.

A picture issued by Civil Defence rescue workers, which Reuters could not independently verify, showed seven small bodies lying beside each other, wrapped in white and blue sheets, after air and artillery strikes on the town of Douma in eastern Ghouta.

The Syrian Observatory for Human Rights, a UK-based monitoring group, said four of them were among a single family of nine killed by an air strike. The other three were among seven killed by shelling in the same town, it said.

The bombardment of eastern Ghouta over the past week has been one of the heaviest of the war, killing at least 556 people in eight days, according to the Syrian Observatory.

It said the intensity of the bombardment had diminished since the U.N. resolution, but that 21 people had been killed in eastern Ghouta on Monday.

Rebel shelling has caused 36 deaths and a number of injuries in Damascus and nearby rural areas in the last four days, Zaher Hajjo, a government health official, told Reuters.

The deputy director general of the World Health Organisation, Peter Salama, said the WHO urgently needed to evacuate 750 medical cases from eastern Ghouta, as well as "sustained access for medical equipment and for medical drugs and commodities".

In eastern Ghouta, people were using the relative lull to find provisions, said Moayad Hafi, a rescue worker based there.

"Civilians rushed from their shelters to get food and return quickly since the warplanes are still in the sky and can hit at any moment," he told Reuters in a voice message.

Lavrov said the ceasefire would not cover either the Ahrar al-Sham or the Jaish al-Islam factions, describing them as partners of the former al Qaeda affiliate the Nusra Front.

The two major rebel factions in eastern Ghouta are Jaish al-Islam and Failaq al-Rahman. Tahrir al-Sham, an alliance of jihadists including Nusra, also has a small presence there.

In Idlib, Ahrar al-Sham and Tahrir al-Sham have been fighting each other in recent days, rather than cooperating.

Syrian state television reported that army units had advanced against militants near Harasta in eastern Ghouta. The state news agency SANA also reported that the army had stopped a car bomb being driven into Damascus.

The Nusra Front has consistently been excluded from ceasefires in Syria, and the opposition says the government has used this as an excuse to keep up its bombardments.