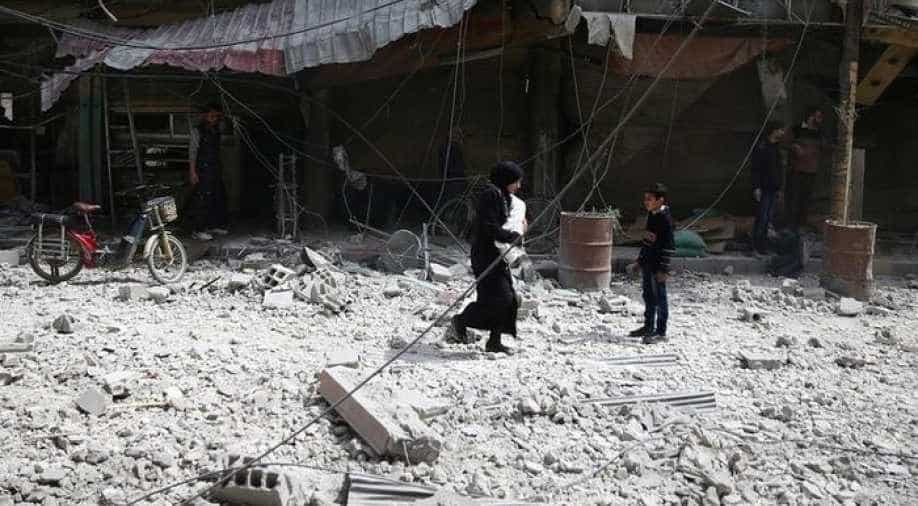 At least 92 people including 30 children died in the suspected sarin gas attack in Khan Sheikhun on April 4. In photo: Residents if the village try to pick up the pieces after the devastating attack. Photograph:( Zee News Network )

Syrian government forces used deadly nerve gas in Khan Sheikhun and in three other recent attacks, Human Rights Watch said Monday, describing a "clear pattern" of chemical weapons use that could amount to crimes against humanity.

President Bashar al-Assad's forces are also stepping up chlorine gas attacks and have begun using surface-fired rockets filled with chlorine in fighting near Damascus, the US-based rights group said in a new report.

"The government's use of nerve agents is a deadly escalation -- and a part of a clear pattern," said Kenneth Roth, the executive director of Human Rights Watch.

"In the last six months, the government has used warplanes, helicopters, and ground forces to deliver chlorine and sarin in Damascus, Hama, Idlib and Aleppo."

"That's widespread and systematic use of chemical weapons," he said.

Human Rights Watch interviewed 60 witnesses and collected photos and videos providing information on the suspected chemical attack in Khan Sheikhun on April 4 and on three other alleged uses of nerve gases in December 2016 and March 2017.

At least 92 people including 30 children died in the suspected sarin gas attack in Khan Sheikhun on April 4, according to local residents and activists. Hundreds more were injured.

Residents said a first bomb believed to be carrying the deadly agent sarin was dropped near the town's central bakery and was followed by three or four high-explosive bombs a few minutes later.

Dozens of photos and videos provided by residents of a crater from the first bomb showed a green-colored metal fragment that Human Rights Watch said was likely the Soviet-produced KhAB-250 bomb.

A third suspected nerve agent attack in northern Hama on March 30 caused no deaths but injured dozens of civilians and combatants, according to residents and medical personnel, the report said.

All four suspected nerve agent attacks were in areas where anti-government fighters were threatening government military air bases, according to Human Rights Watch.

The alleged attacks were systematic and in some cases directed against civilians, which would meet the legal criteria to be characterized as crimes against humanity, the rights group said.

Last month, Assad told AFP in an interview that the suspected sarin attack in Khan Sheikhun was "100 percent" fabricated, serving as a pretext for US missile strikes on a Syrian air field.

The rights group said the string of suspected attacks cast doubt over Syrian and Russian claims that toxic agents were released in Khan Sheikhun after a bomb struck a chemical weapons depot on the ground.

"It would not be plausible that conventional bombs struck chemical caches repeatedly across the country," said in the report titled "Death by Chemicals."

The Organisation for the Prohibition of Chemical Weapons (OPCW) is investigating allegations of chemical weapons use in Syria along with the joint UN-OPCW panel (JIM) which is tasked with assigning responsibility for the attacks.

Such a move by the council in 2014 was blocked by Russia, Assad's top ally, and China.