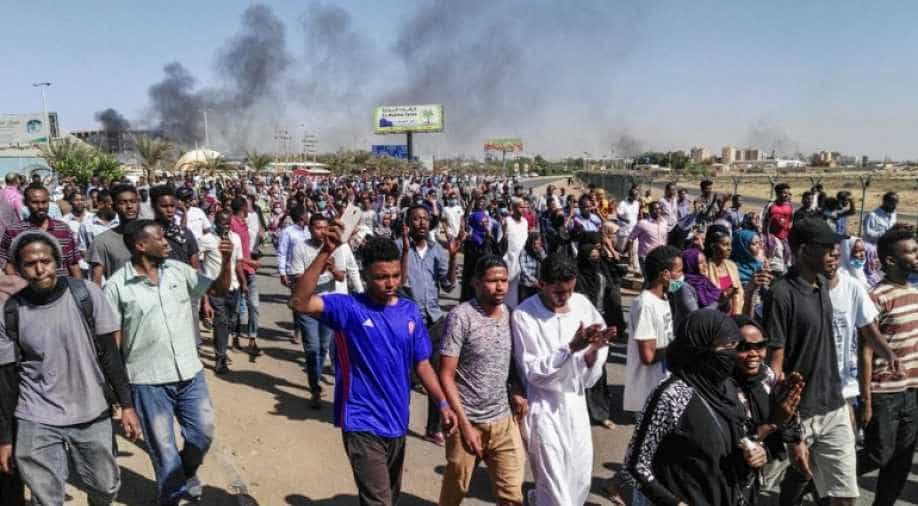 'When the army is here, we have no fear,' Sudanese protesters flashing victory signs chanted as military vehicles with soldiers fanned out around the complex.

Sudan's army deployed around its Khartoum headquarters Monday as thousands of protesters urging the military to back calls for leader Omar al-Bashir's resignation defied tear gas to demonstrate for the third day, witnesses said.

"When the army is here, we have no fear," protesters flashing victory signs chanted as military vehicles with soldiers fanned out around the complex, onlookers said.

Since protests erupted across Sudan in December agents of the powerful National Intelligence and Security Service (NISS) and riot police have cracked down on demonstrators, but the army has not intervened.

Protesters have since Saturday camped out around the army complex -- which also houses Bashir's residence and the defence ministry -- in the biggest anti-government demonstrations for months.

Witnesses said soldiers were putting up barricades in streets near the compound after a crackdown by NISS personnel and police failed to dislodge the demonstrators.

"After that, security forces began firing tear gas at protesters," a witness said on condition of anonymity.

Gunshots were also heard, witnesses said, but it was not clear who fired.

Some activists on the ground said it was the army shooting in the air, but this could not be confirmed independently.

Protest organisers urged the military to protect the demonstrators from secret service agents and riot police.

"We want you, the young officers and soldiers, to remain committed to the role of the national army, which is of protecting the people," the Sudanese Professionals Association said in a statement.

The morning tear gas was felt by residents in an upscale Khartoum district some five kilometres away from the army complex.

"I stepped out on my balcony hearing the sound of the gas canisters and could feel the gas in the air," said one resident.

Protest organisers urged the residents of Khartoum and nearby areas to join the demonstrators who have been on the streets for three days straight.

"Security forces of the regime are trying to disperse the sit-in by force," the organisers called the Alliance for Freedom and Change said in a statement.

"We call on all people around Khartoum to gather there to protect our people on the ground."

Crowds of people carrying food and water were later seen walking towards the army complex to participate in the demonstration, according to onlookers.

Some companies have told employees not to come into work "until further notice".

The rally outside the army headquarters has been the largest since protests began on December 19 in the central town of Atbara, quickly spreading to the capital and towns and cities across the east African country.

Chanting anti-government slogans, protesters have been urging the military to back them in demanding Bashir's resignation.

The European Union said an "unprecedented" number of people had come out calling for change since Saturday.

"The people of Sudan have shown remarkable resilience in the face of extraordinary obstacles over many years," the EU's External Action Service said.

"Their trust must be won through concrete action by the government."

The protesters accuse Bashir's administration of economic mismanagement that has led to soaring food prices and regular shortages of fuel and foreign currency.

Sudan's security council on Sunday said the demands of the protesters "have to be heard" after a meeting chaired by the veteran leader.

The demonstration coincided with a nationwide blackout that the electricity ministry blamed on a technical glitch.

Sudan's protests first erupted in response to a government decision to triple the price of bread.

But they quickly morphed into nationwide demonstrations against Bashir's three-decade rule.

Officials say 32 people have died in protest-related violence so far, while Human Rights Watch has put the death toll at 51.

In recent weeks the scale and intensity of protests had dwindled due to a state of emergency imposed by Bashir, but Saturday saw a resurgence as thousands headed to the army headquarters.

Protest organisers chose April 6 for the rally to mark the 1985 uprising that toppled the regime of then president Jaafar Nimeiri.

Bashir, wanted by the Hague-based International Criminal Court for alleged war crimes and genocide in the conflict-wracked region of Darfur, swept to power in an Islamist-backed coup in 1989.