Soup-erpower? How Borscht is causing culinary spat between Russia and Ukraine 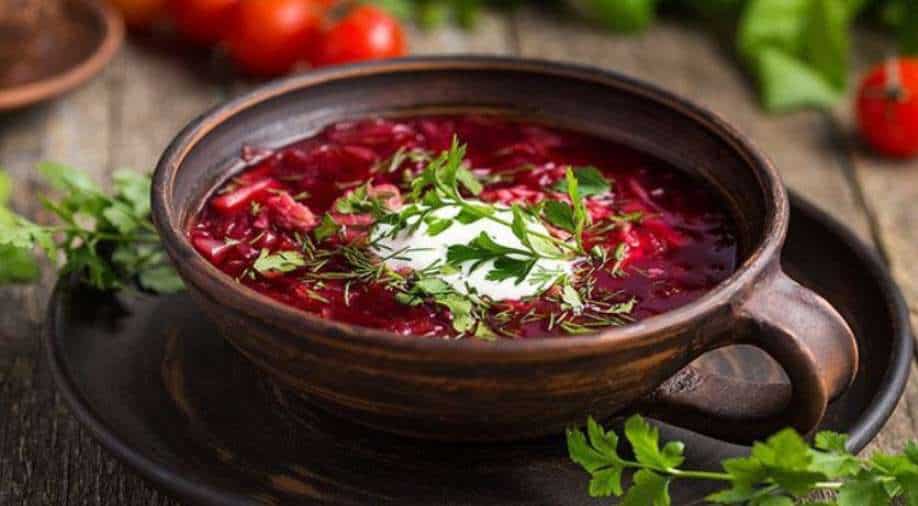 Ukrainians claim that borscht was first mentioned in 1548 in the diary of a European traveller who tasted the soup in a market near Kiev. They say it arrived in Russia much later with Ukrainian settlers

Ukrainian chef Ievgen Klopotenko never expected to find himself at the centre of the conflict between Russia and Ukraine.

But that's just what happened when the 33-year-old pushed to have borscht -- the traditional beetroot and cabbage dish -- recognised as part of Ukraine's historical heritage.

"I don't really like to call it a war for borscht, but in fact, that's what it is," Klopotenko, a graduate of the Le Cordon Bleu culinary school said.

The chef said he was fed up with how restaurants around the world -- including those serving "so-called Ukrainian cuisine" -- were referring to borscht as Russian soup.

So last month he brought a pot of borscht to Ukraine's culture ministry to convince officials to submit an application to United Nations cultural body UNESCO to list borscht as an intangible part of the country's cultural heritage.

The ministry agreed and said it was preparing the application to UNESCO before the March deadline, so it can be examined in December next year.

And suddenly Moscow bristled. On Twitter, Moscow's embassy in the US said it was the national food of many countries, each with its own recipe.

Borscht is a national food of many countries, including @Russia, Belarus, Ukraine, Poland, Romania, Moldova and Lithuania. Each country has its own ingredients, but there are no strict recipes.
Choose your favorite one 👉https://t.co/7IUPX91AdA #RussianCuisine pic.twitter.com/4nfCJ1nUxk

The Russian government soon followed on its own Twitter account, calling borscht "one of Russia's most famous and beloved dishes and a symbol of traditional cuisine".

Ukrainians claim that borscht was first mentioned in 1548 in the diary of a European traveller who tasted the soup in a market near Kiev. They say it arrived in Russia much later with Ukrainian settlers.

Tensions between Kiev and Moscow have flared in the decades following the break-up of the Soviet Union in 1991.

After a pro-Western popular uprising in Kiev in 2014 followed by Russia's annexation of Crimea and support of separatists in the east, the confrontation has intensified.

For Klopotenko, the battle over borscht is really about Ukraine's identity.

The country has been closely tied to Russia for most of its history.

Much of what is now Ukraine was part of the tsarist Russian empire and later the country became part of the Soviet Union.

"When I started studying Ukrainian food and cuisine, I realised that Ukrainian cuisine does not exist in Ukraine. It's all Soviet," Klopotenko said.

The Soviet Union "swallowed" Ukraine, "chewed it and spat it out... We don't know who we are or what we are," he added.

But there is one thing for Klopotenko that is quintessentially Ukrainian: the beetroot and cabbage soup.

"I realised that borscht is what unites us," he said.

"We may be different, we eat different types of borscht cooked to different recipes, but it's borscht."

The application will not contain a recipe for borscht as "nobody knows the authentic one", Klopotenko said.

Ukrainian historians say it was first mentioned in 1548 in the diary of a European traveller who tasted the soup in a market near Kyiv. They say it arrived in Russia much later with Ukrainian settlers.

Olena Shcherban, a Ukrainian ethnologist and historian, said it is "absurd" to associate borscht with Russia.

"I always say that it's a dish that I ate almost immediately after my mother's milk. This is the first dish. This is a dish that I eat every day, which I cook for my children and my family."

The 40-year-old says that Ukrainians do not know their history well and have a "lack of pride" in their gastronomy, unlike the French or Italians.

She has tried to promote the dish through a festival in the village of Opishnya in central Ukraine that she has organised for seven years.

And this month, she opened a museum dedicated to borscht.