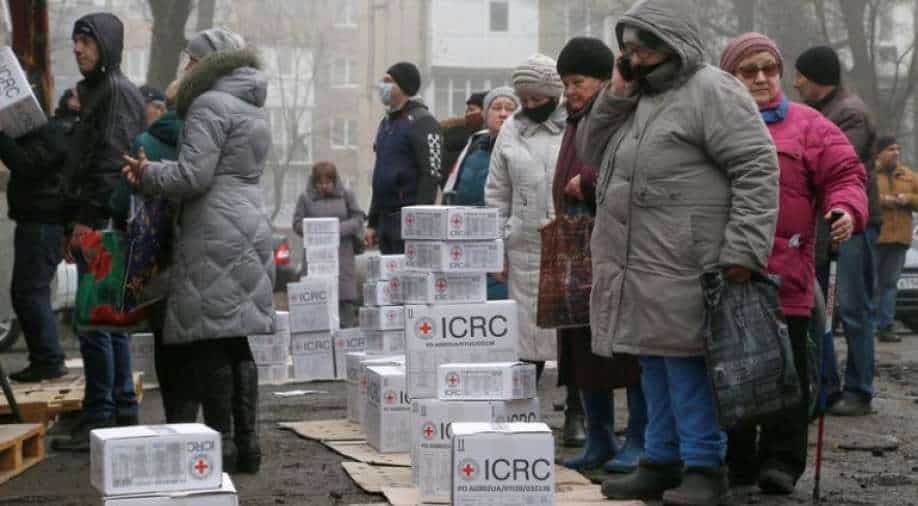 FILE PHOTO: Local residents gather near a cargo trailer loaded with boxes containing food and personal hygiene products during the distribution of humanitarian aid from the International Committee of the Red Cross in the rebel-controlled city of Donetsk, Ukraine, March 17, 2021. Photograph:( Reuters )

The Red Cross appealed on Tuesday for more than $270 million to help people caught up in the Ukraine conflict, fearing that millions are rapidly being plunged into extreme suffering.

"To respond to this sudden, massive need, the two organisations together are appealing for 250 million Swiss francs ($273 million, 243 million euros)," the joint movement said.

The ICRC is appealing for 150 million Swiss francs for its 2022 operations in Ukraine and neighbouring countries.

Red Cross teams on the ground are trying to provide life-saving help including basic aid items, medical supplies and shelter.

"The needs of the people affected by the conflict are increasing by the hour," said IFRC secretary general Jagan Chapagain.

"I call for global solidarity to ramp up the assistance to people suffering because of this conflict."

Watch | Gravitas: Russia's Ukraine invasion: How Ukrainians are fighting back