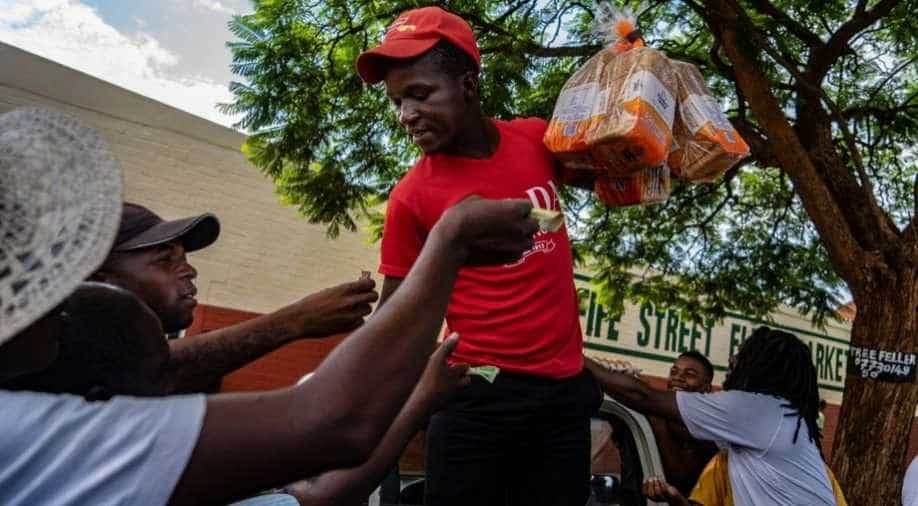 People jostle for a chance to buy a loaf of bread from a vendor at a market in Bulawayo. Photograph:( AFP )

Zimbabweans can barely keep pace with the price rises that have rekindled fears of hyperinflation which reached 500 billion per cent a decade ago and forced the country to trash its own currency.

The price of bread shot up 60 per cent overnight in Zimbabwe, in the latest blow for a population already struggling with spiralling living costs.

Zimbabweans can barely keep pace with the price rises that have rekindled fears of hyperinflation which reached 500 billion per cent a decade ago and forced the country to trash its own currency.

Already many families live on one meal a day, with the southern African country in the grip of a major downturn that has provoked biting shortages of basics such as fuel and medicine.

Bakers said they were forced to hike their prices due to rising production costs.

Electricity prices have "gone up significantly, the price of fuel has also been going up weekly, the prices of raw materials have also gone up including the cost of importing wheat," said Dennis Wala, the president of the National Bakers' Association.

Electricity is only available for around six hours a day, forcing many bakers to use generators to run their ovens.

"The bread manufacturer is at the end of the value chain and we have to factor in all these costs, but we don't prescribe prices to our members," Wala told AFP.

The price of a loaf of bread soared to 15 Zimbabwe dollars (around US$1) on Wednesday from nine dollars the previous day, according to an AFP correspondent.

Bread is the second most important staple in the country after a thick cornmeal porridge known in the local Shona language as "sadza".

After decades of mismanagement under the late dictator Robert Mugabe, Zimbabwe reached absurd levels of hyperinflation in 2008-2009 when the central bank started printing money.

Mugabe's successor Emmerson Mnangagwa has failed to stop the latest inflation surge, last week begging for patience to bring the economy back from the "dead".

But the economy is near breaking point.

Hundreds of thousands of government workers said this week they could no longer afford to report for duty as their wages had been rendered almost worthless.

Last week the authorities quadrupled the price of electricity -- which is already in short supply after a 400 per cent hike in August.

Earlier this month, the price of fuel rose more than 25 per cent, the latest in series of regular increases.

The official inflation rate was 290 per cent last month, but economists estimate it is at least double that figure.