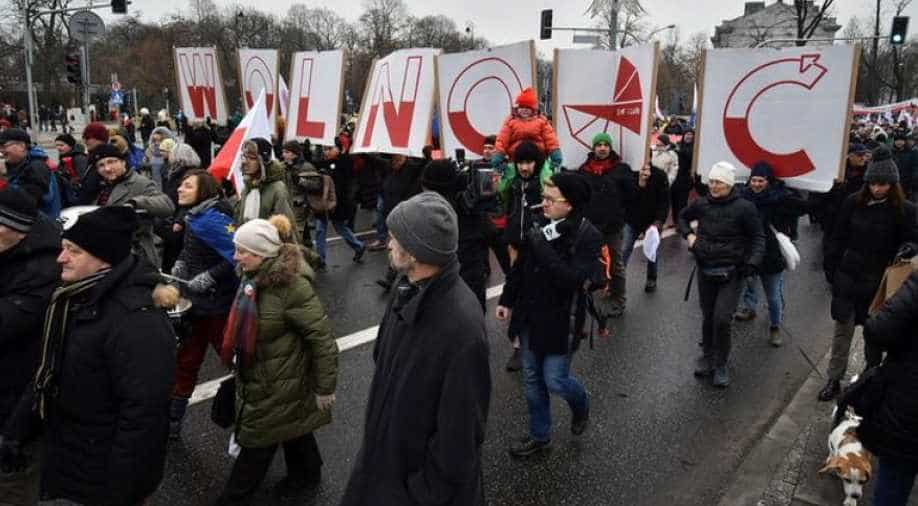 Since coming to power in October 2015 the nationalist-minded, eurosceptic PiS has come under fire at home and abroad for what critics say are undemocratic moves designed to tighten its grip on power. Photograph:( Reuters )

Polish opposition lawmakers who accuse the ruling PiS party of undermining democracy and the constitution occupied the main hall of parliament for a fourth day on Monday, amid efforts to defuse Poland's biggest political standoff in years.

President Andrzej Duda was due to discuss the situation with the speaker of parliament and Law and Justice (PiS) party chief Jaroslaw Kaczynski. Duda, a PiS ally, met opposition leaders on Sunday.

"Something wrong has happened to Polish democracy," Grzegorz Schetyna, leader of the biggest opposition party, Civic Platform (PO), told private radio station RMF FM, saying he was ready to meet Kaczynski, who has no formal role in government but is seen as a strong influence on party policy.

Since coming to power in October 2015 the nationalist-minded, eurosceptic PiS has come under fire at home and abroad for what critics say are undemocratic moves designed to tighten its grip on power.

These include changes to the constitutional court that led the European Commission to say democracy and the rule of law were under threat in Poland and which Poles continued to protest against over the weekend. The government has also moved to exert more control over state prosecutors and approved legislation that human rights groups said would curtail freedom of assembly.

Tensions flared on Friday over government plans to limit media access to parliament, with opposition lawmakers occupying the plenary hall's podium in protest and thousands of Poles gathering in the streets.

The standoff escalated further when PiS lawmakers moved a planned vote on the 2017 budget to a side room late on Friday, and the opposition accused them of contravening legal procedure when they passed the law.

PO officials said on Monday they would notify prosecutors about the passage of the budget and demanded the resignation of parliamentary speaker Marek Kuchcinski.

PiS's media plan would see all direct recording of parliamentary sessions banned from January 1 except by five selected television stations, while the number of journalists allowed in parliament would be limited to two per media outlet.

PiS has already tightened control over public news media and critics see the curbs as an extension of that.

A poll for daily Rzeczpospolita on Monday found 68 per cent of Poles think curbing media access would limit their ability to know what parliament is doing.

Opposition and government officials have accused each other of fomenting the unrest for political gain.

"Many lawmakers are bringing evidence now that the situation was planned, for example, that opposition parties had ordered catering in advance, hundreds or thousands of sandwiches," foreign minister Witold Waszczykowski told reporters.

Waszczykowski added that the government was open to compromise over the new media rules, suggesting they could end up "being not as restrictive as the initial proposals".

Katarzyna Lubnauer of the liberal Modern party said it was the parliamentary speaker who had ordered the sandwiches in preparation for a late-night budget debate.

PO officials said lawmakers who spent the night in parliament had been forced to sit in the cold and in darkness.

"Now the light is back on, we can read newspapers," Jan Grabiec told Reuters from the room.

Street demonstrations continued at a low level on Monday, with more planned for later in the day.

Financial markets have reacted calmly to the crisis. The zloty currency was little changed on Monday at 4.41 per euro, while the main stock market index WIG eased by 0.3 per cent.