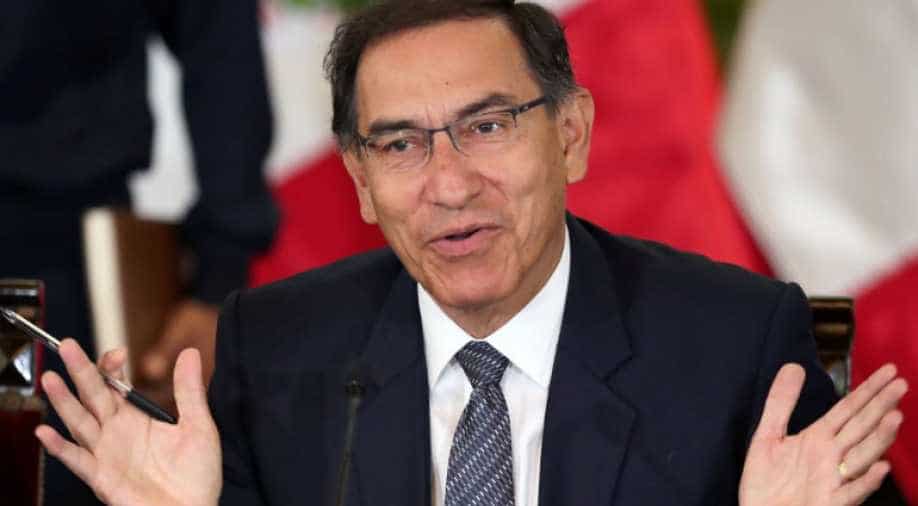 Peruvian President Martin Vizcarra on Sunday dared lawmakers to dismiss his Cabinet in a dispute over his proposed anti-graft reforms, invoking a constitutional procedure that puts him on a collision course with the opposition party controlling the Congress.

The escalation in tensions between the executive and legislative branches is ushering in a new period of political uncertainty in Peru, the world's second-biggest copper producer and one of Latin America's most stable economies.

Vizcarra asked the Congress for a new vote of confidence in his Cabinet to gauge support for four bills to curb corruption that he sent to lawmakers in July, in response to a scandal involving judges, lawmakers and prosecutors that has triggered protests and diminished trust in public institutions.

By making passage of the bills a question of confidence in his government, Vizcarra is pushing Congress into a corner.

Under Peru's constitution, if Congress dismisses two Cabinets formed by a single administration, the president can close Congress and call legislative elections. The current Congress already dismissed the Cabinet formed under former President Pedro Pablo Kuczynski, whom Vizcarra replaced in March after serving as his vice president.

"We hope history does not repeat itself after a year, when this Congress refused to renew its confidence in the Cabinet..." Vizcarra warned in a televised message to the nation late on Sunday, telling Peruvians he would make good on promises to fight graft at any cost.

In March, Kuczynski resigned in a graft scandal on the eve of his near-certain impeachment by Congress, where lawmakers representing a conservative party led by opposition leader Keiko Fujimori have a majority of seats.

Kuczynski blamed his fall on Fujimori's party and warned a week ago that Congress was aiming to oust the president again. Opposition lawmakers have denied the charge and say Vizcarra's proposed reforms are less urgent than other matters.

"We've seen lawmakers trying to prolong and redefine the spirit of the legislation, with absurd modifications that if approved would become useless and harmful laws," Vizcarra said.

Vizcarra has proposed creating a new system for selecting judges and prosecutors, ending the immediate re-election of lawmakers, creating a second chamber in Congress, and criminalizing unreported campaign contributions.

The proposed reforms are supported by most Peruvians. In a recent Ipsos poll, 79 percent of Peruvians favor a petition including the changes in a referendum Vizcara wants during regional elections in December.

"I represent the widespread acclaim for reform now," Vizcarra said. "We will not be broken."