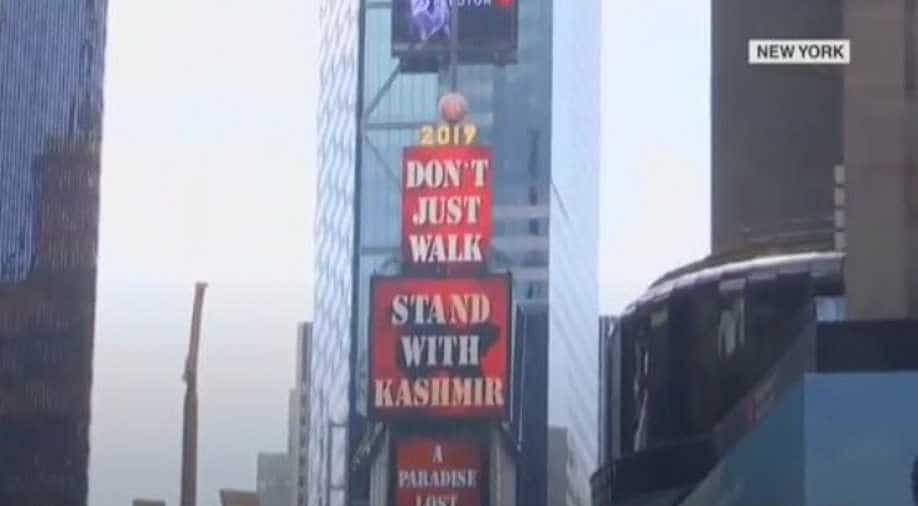 A billboard on a building at Times Square in New York said 'Stand with Kashmir'.

A desperate Pakistan already plagued by acute financial crisis has been spending millions of dollars to further its propaganda on Jammu and Kashmir at Times Square in New York.

Huge billboards in New York are often used for political advertising and campaigning. WION's Executive Editor Palki Sharma Upadhyay reports on how Pakistan used one such space at Times Square to politicise and internationalise the Kashmir issue.

One of the quintessential features of New York's Times Square are the gigantic billboards. Neon, digital signs deck all the buildings and advertisements appear on almost everything from products, movies and with political advertisements also visible on several occasions.

One such campaign on Kashmir was spotted on one of the buildings. "Stand with Kashmir", it said.

"This is a motivated, political campaign sponsored by, it would be fair to say, the Pakistan government as they have tweeted about it with this picture saying that they are raising awareness," Upadhyay reported from New York.

With the extraordinary efforts of PM Imran Khan, Kashmir issue has now become a Global concern. The voice of people of IOJ&K is once again being heard in the highest diplomatic forums.
“Stand With Kashmir” has been highlighted on Times Square New York, today.#StandWithKashmir pic.twitter.com/2k8u4PYNp1

Interestingly, real estate in New York, especially at Times Square is extremely expensive and it can reportedly cost anywhere up to $1-4 million per year to advertise on one billboard at Times Square.

"Not just this, across New York City, there have been banners on human rights violations in Pakistan's Balochistan, Karachi," Sibal said in his ground report from New York.