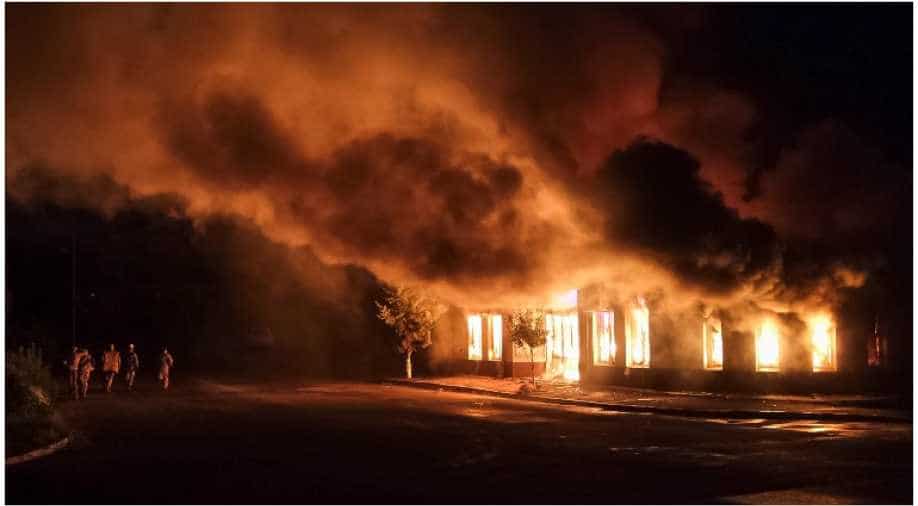 The conflict between Armenia and Azerbaijan is feared to lead to a full-scale war Photograph:( Reuters )

Armenia and Azerbaijan had failed to reach agreement on a fresh ceasefire in the Nagorno-Karabakh conflict during talks in Geneva Friday. They, however, vowed to now target civilians.

Russia said on Saturday it would provide "necessary" assistance to Yerevan in its conflict with Azerbaijan over the breakaway region of Nagorno-Karabakh if fighting reached Armenia's territory.

"Russia will render Yerevan all necessary assistance if clashes take place directly on the territory of Armenia," the foreign ministry in Moscow said, calling on the warring sides to immediately halt fire.

Armenia and Azerbaijan had failed to reach agreement on a fresh ceasefire in the Nagorno-Karabakh conflict during talks in Geneva Friday. They, however, vowed to now target civilians.

Both sides, the statement said, had "engaged in an open and substantive exchange of views aimed at clarifying their negotiating positions" on sticking points in the ceasefire agreement reached in Moscow on October 10.

That and two subsequent ceasefire agreements -- the most recent one negotiated in Washington less than a week ago -- have failed to halt the bloodshed.

On Saturday, Pasninyan sent the letter to Putin after Armenia and Azerbaijan failed to agree a fresh ceasefire in the Nagorno-Karabakh conflict during talks in Geneva on Friday and as fighting continued overnight and Saturday morning.

Russia has a military base in Armenia and has a defence treaty with Yerevan.

The announcement, released by the Armenian foreign ministry, raised fears of an escalation in fighting between Armenia and Azerbaijan. Some observers are concerned it risks sucking Yerevan's ally Russia and Turkey, which backs Baku, into the conflict.

Armenian Foreign Minister Zohrab Mnatsakanyan and his Azerbaijani counterpart Jeyhun Bayramov sat down for face-to-face talks on Friday aimed at reining in more than a month of clashes in the disputed region that have killed more than a thousand people.

Mediators from France, Russia and the US -- known as the "Minsk Group" -- said in a statement they had urged the sides to fully implement a previously agreed ceasefire.

While Friday's statement made no mention of fresh ceasefire commitments, it said the sides had "agreed to take a number of steps on an urgent basis."

They had committed to "not deliberately target civilian populations or non-military objects in accordance with international humanitarian law." They had also agreed to "actively engage in the implementation of the recovery and exchange of remains on the battlefield."

Also, they committed to provide written comments and questions related to discussions around introducing mechanisms to verify if a ceasefire was being upheld -- viewed as a key priority in the talks.

"The co-chairs will continue working with the sides intensively to find a peaceful settlement of the conflict," Friday's statement said.

Azerbaijan and Armenia have been locked in a bitter conflict over Karabakh since Armenian separatists backed by Yerevan seized control of the mountainous province in a 1990s war that left 30,000 people dead.

Karabakh's self-declared independence has not been recognised internationally, even by Armenia, and it remains a part of Azerbaijan under international law.

The current clashes broke out on September 27 and fighting has persisted despite the repeated international attempts to secure a ceasefire.

Fighting has intensified in recent days, including with renewed shelling and rocket attacks on civilian areas.

More than 1,200 people from both sides have been reported dead since the fighting began, and thousands forced from their homes.

Azerbaijan has not released military casualty figures and the death toll is believed to be higher, with Russian President Vladimir Putin saying last week close to 5,000 people had been killed.