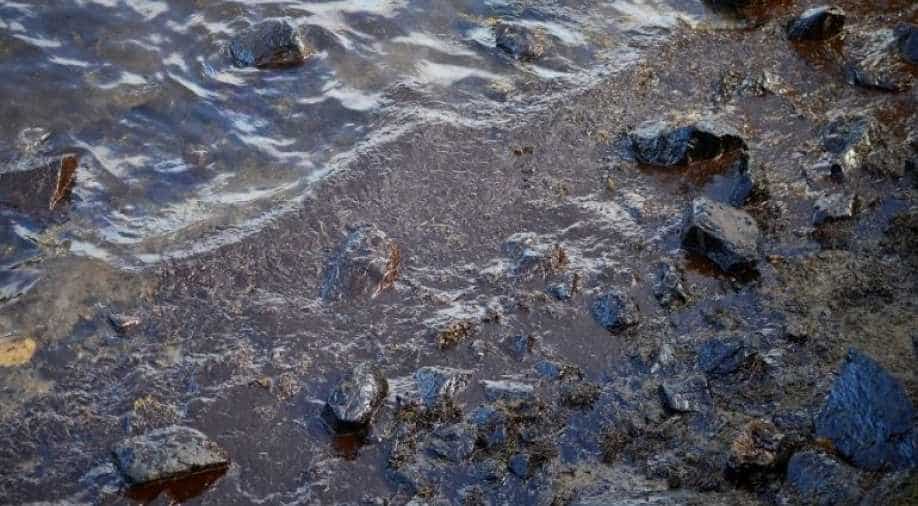 Spilled oil from the bulk carrier ship MV Wakashio, belonging to a Japanese company but Panamanian-flagged, that ran aground on a reef, is seen at the Mahebourg Waterfront in Riviere des Creoles, Mauritius Photograph:( Reuters )

Tourist operators in Mauritius fear that an oil spill from a Japanese ship will further damage their businesses, already reeling from the coronavirus epidemic, and could cost jobs if their pristine beaches are spoiled.

Tourism generated $1.6 billion for the economy last year. In May, the central bank said that in the past two months alone, the nation had lost 12 billion rupees in foreign exchange due to the fall in tourism.

Willow River-Tonkin, who owns a kite-surfing business, said local guides would be some of the hardest hit.

"It is really going to affect the communities down there, especially for the fisherman, the local guys that live there, you know that's how they make money from tourists," he said.

"Taking them out to go diving to go snorkelling, to go wake boarding, to go see dolphins and all that sort of thing you know and all of that is going to affect it, if we don't get it under control very soon."

The MV Wakashio, owned by Nagashiki Shipping and operated by Mitsui OSK Lines Ltd, struck a reef and went aground off the Indian Ocean island's southeast coast on July 25. It began leaking oil last last week.

Mauritius avoided a second catastrophic oil spill Wednesday after salvage crews pumped the remaining fuel from the tanks of a cargo ship that ran aground off its coast, imperilling world-famous wildlife sanctuaries.

Romina Tello, the 30-year-old founder of sustainable tourism agency Mauritius Conscious, said that border closures due the coronavirus had already battered tourism. Mauritius shut its borders on March 19 and has had only 344 cases of COVID-19, of which 332 have recovered and 10 have died. It is still closed to international air travel.

The southeast coast where the oil spill happened is famous for snorkelling, kite surfing and people visiting the sea flora and the fauna of Mauritius, Tello said, as well as sailing, as boats tend to travel to the islands nearby.