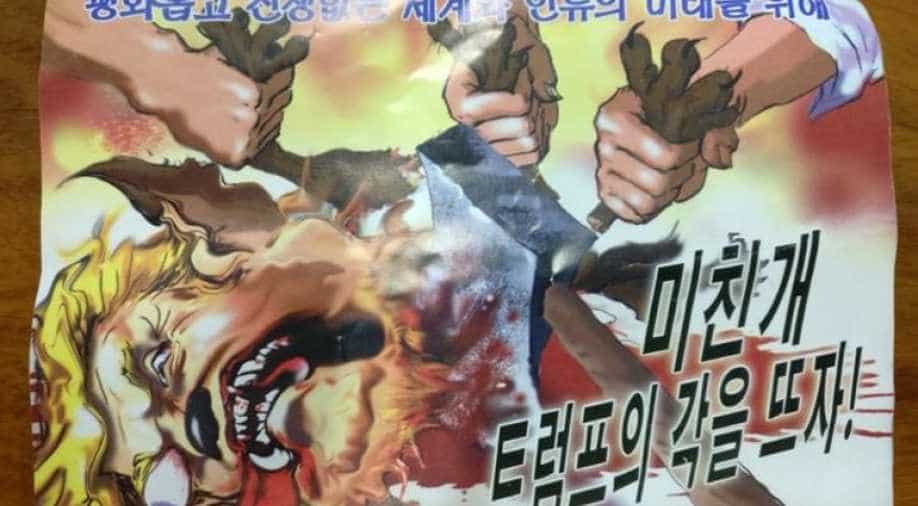 An anti-Trump leaflet believed to come from North Korea is pictured in this undated handout photo released by NK News. The text in Korean reads ''For the peaceful world without war and for the future of mankind' and 'Butcher a mad dog Trump'. Photograph:( Reuters )

Propaganda fliers presumed to be from North Korea and calling US President Donald Trump a "mad dog" have turned up across central Seoul, including near the presidential Blue House, according to posts on social media and people who found them.

"Death to old lunatic Trump!" reads one poster, with a North Korean soldier with rifle in hand, crushing what looks to be Trump's head with his tongue dangling out of his mouth. Near the soldier's head is the line: "Complete obliteration."

Another poster shows Trump with the body of a dog being decapitated by an axe. Blood is shown splattered on the axe in the poster, which states: "Let's behead mad dog Trump for the future of a peaceful and warless world and mankind!"

Both were in colour.

It is not difficult to find North Korean propaganda posters in South Korea, usually flown by balloon over the highly fortified demilitarized zone. Military images and anti-US threats are common in North Korea propaganda as Pyongyang demands the United States cease what it says is its preparations for an invasion.

But the new series of fliers posted recently on Twitter and other social media target Trump specifically.

Trump last month, in a speech to the United Nations, threatened to "totally destroy" North Korea if needed to defend itself and allies and called the North's leader Kim Jong Un a "rocket man" on a suicide mission.

"I am pretty sure it came from North Korea by balloon, since the prevailing winds during October have been from north to south and we've been getting reports of others finding them throughout Seoul," said Chad O'Carroll, managing director of NK News, a Seoul-based news subscription service, who found the leaflets while jogging in central Seoul.

In an apparent jab at Trump's UN speech, one of the propaganda posters featured Trump standing behind a podium with a rocket in his mouth painted with the words "totally destroy North Korea".

Again, Trump is depicted as a dog with a human face and labelled as "mad dog Trump".

Men in suits with surprised looks on their faces are shown in the poster saying "He's gone completely insane" and "If we let him be, there will be war".

Reclusive North Korea, which has carried out a series of nuclear and missile tests in defiance of UN sanctions, and the rich, democratic South are technically still at war because their 1950-53 conflict ended in a truce, not a peace treaty.

The North regularly threatens to destroy the South and its main ally, the United States.