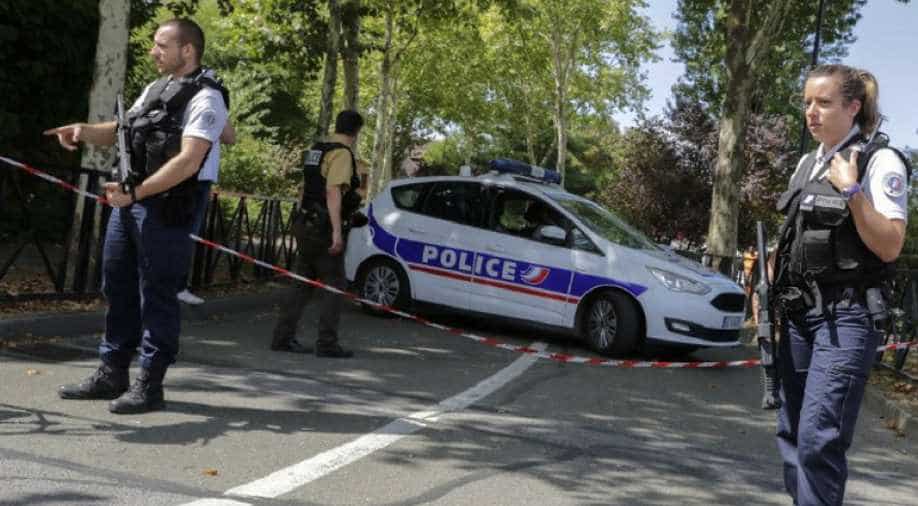 French police officials stand alert as they cordon off a road in Trappes, south-west of Paris. Photograph:( AFP )

A man stabbed his mother and sister to death and seriously injured another person in a town near Paris on Thursday before being shot dead by police.

The killer had serious mental health problems and had been on a terror watch list since 2016, Interior Minister Gerard Collomb told reporters after visiting the scene in the town of Trappes.

The motive for the violence remained unclear despite a claim by the Islamic State group that it was an attack by one of its fighters responding to the terror organisation's propaganda.

Collomb said the attacker was "mentally unstable, rather than someone who was committed, who would respond to orders from a terrorist organisation, in particular Daesh," another name for IS.

Regular French criminal prosecutors are investigating the case rather than anti-terror specialists, Collomb stressed, although checks on the knifeman's phone and computer were under way.

Experts have urged caution about recent IS announcements because it has lost credibility after claiming responsibility for seemingly unrelated violence as it faces defeat on the battlefield in the Middle East.

The killing spree began early on Thursday in Trappes, a poor town with a large Muslim population about 30 kilometres (20 miles) southwest of the capital.

Armed police responded to reports of violence and were threatened by the man who stabbed his mother to death in her home, Collomb added.

"He walked towards the police with his knife," he said. "Police then opened fire."

The assailant has not yet been named.

Only a short drive from the wealthy area of Versailles, home to a world-famous palace, Trappes is known for its social problems linked to poverty, drugs and hardline interpretations of Islam.

About 50 locals are suspected of having left France to fight for the Islamic State group in Syria and Iraq, French security sources have previously told AFP.

The knifeman had been on the terror watch list since 2016 after expressing extremist views, a security source told AFP.

BFM television reported that he had serious alcohol and drug problems.

France remains on high alert after a string of jihadist attacks since 2015 that have claimed the lives of more than 240 victims.

IS claimed the Trappes attacker was one of its fighters.

"He carried out the attack in response to calls to target subjects of the countries of the coalition" fighting IS, said a statement on its propaganda channel Amaq.

The leader of the extremist group Abu Bakr al-Baghdadi had called on Muslims to wage "jihad" in a purported new audio recording released on Wednesday.

The group claimed responsibility for a massacre in Las Vegas last year that saw a wealthy accountant open fire on a crowd in one of the deadliest mass shootings in recent US history.

US investigators concluded that there was "no evidence of radicalisation or ideology to support any theory that (Stephen) Paddock supported or followed any hate group or any domestic or foreign terrorist organisation".

French terror expert Jean-Charles Brisard, head of the Center for the Analysis of Terrorism (CAT), said it was "too soon to say" if IS had a hand in the violence in Trappes.

"But remember that in 2017 we had three claims of responsibility that were outlandish by Islamic State... above all the massacre in Las Vegas," he told AFP.