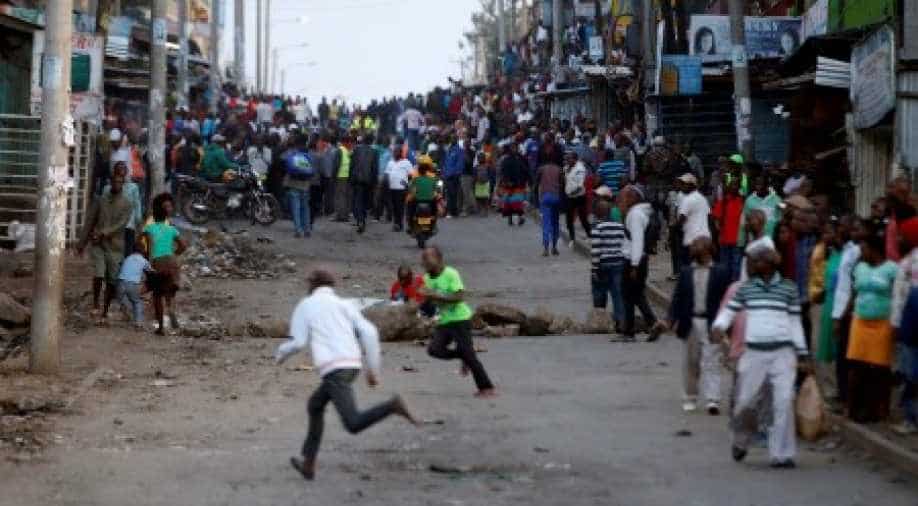 Odinga, who has lost his fourth election, was expected to give his first reaction to Kenyatta's Monday night victory Photograph:( Reuters )

After a disputed election in 2007, around 1,200 people were killed when political protests sparked ethnic clashes, leading to a prolonged slump in the region's richest and most important economy.

Journalists walked out in mess after veteran political journalist Francis Gachuri and 25-year-old television journalist Jane Gatwiri were assaulted while waiting for Odinga to speak.

'We heard in Swahili, 'Citizen (TV) must leave,' she said. 'When I was trying to record, I got a very hot slap on my face – my right cheek. Someone said I should move, pushed me, my camera was about to be broken.'

Some of Odinga's supporters have accused Citizen of bias towards Kenyatta after the channel ran a tally of last week's vote.

Odinga, who has lost his fourth election, was expected to give his first reaction to Kenyatta's Monday night victory, but delayed a speech planned for Tuesday morning by several hours.

Odinga boycotted the poll, saying it would not be fair. Kenyatta's won by a margin of 98 percent, provoking anger in some pro-Odinga strongholds, whose residents burnt tyre barricades and threw rocks at police.

His spokesman later issued an apology for the attack on the journalists, which happened in the Wiper Party headquarters, a party in his coalition.

'The Coalition registers unreserved apology to reporters who fell victim to this unfortunate incident," the statement said. "The youth acted on their own and we condemn their actions in strongest terms possible.'

There were no reports of protests elsewhere as supporters waited for Odinga's speech.

'We are just waiting for Baba to speak,' said Desmond Litava, an Odinga supporter in Kawangware, a restive slum in the capital, Nairobi, using a term of respect for the leader.

Odinga could call for his supporters to take to the streets, unleashing chaos in cities such as Nairobi and Kisumu to the detriment of the already struggling economy.

After a disputed election in 2007, around 1,200 people were killed when political protests sparked ethnic clashes, leading to a prolonged slump in the region's richest and most important economy.

On the other hand, Odinga could limit his appeal to the courts, as he did in 2013, and yield to diplomatic pressure to engage in post-election 'national dialogue' with Kenyatta.

But in his acceptance speech, Kenyatta ruled out the possibility of dialogue with Odinga if the opposition lodged any legal cases contesting his victory.

That August 8, vote was annulled by the Supreme Court on the basis of procedural irregularities in the vote-tallying. Odinga said the re-run was also flawed because of a failure to replace key officials of the election commission.

Fourteen people have died in political violence nationwide since Thursday's vote, according to diplomatic sources. A provisional government tally said nine people had been killed.