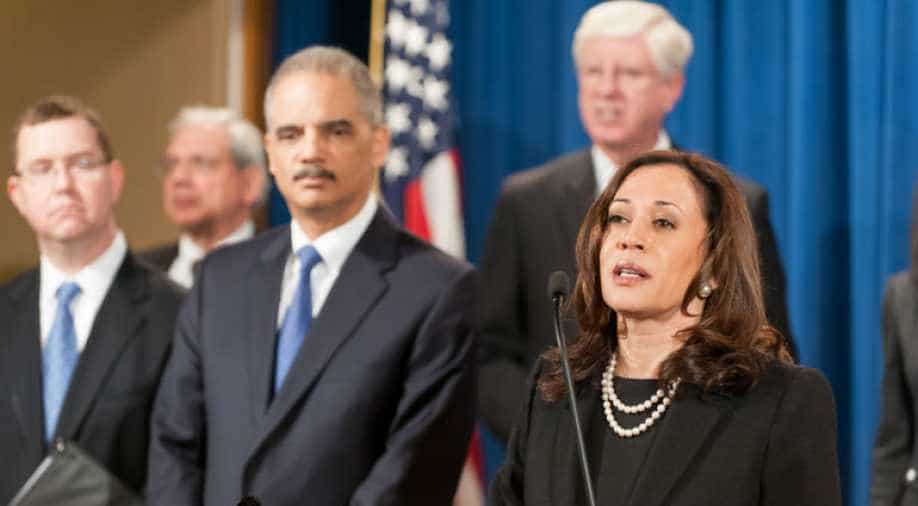 File photo of US Senator Kamala Harris Photograph:( Others )

California's junior senator will not put up a fight for re-election this term, but that hasn't stopped her from campaigning for the Democrats across America.

The United States is geared up to vote in the upcoming midterm elections. While the House of Representatives has all 435 seats at stake, voters will elect a new governor in 36 states. Speaking of the US Senate, 36 out of 100 senators will fight it out this midterm. US Senator from California and the only Indian-American in the Senate, Kamala Harris, has her seat secured this time but has been going big on campaigning for the Democrats.

Harris’ campaign strategy and fundraising activities for the Democrats this year have made her increasingly popular, to an extent that she is now being seen as one of the strongest Democrat contenders for the 2020 Presidential polls.

Born on October 20, 1964, in California, Kamala Devi Harris’ journey to the United States Senate has been nothing short of inspiring. Harris’ mother migrated to the States from Madras, India while her father is a Jamaican. Her parents met as activists during the civil rights movement. The African-American cause and the immigration policy have been close to Harris’ agenda.

Also read: US midterm polls, how they work and what is at stake

Last month Harris headed to South Carolina, a move that fanned her prospects as a possible 2020 contender. The majority of South Carolina primary Democratic electorate is African American. South Carolina has proven critical in Democratic politics; the state played a pivotal role in propelling both Barack Obama and Hillary Clinton to the 2008 and 2016 presidential nominations, respectively.

In South Carolina, Harris acknowledged the importance of black voters for Democratic politics, at the same time she carefully phrased her message to a wider audience.

"Leaders should be able to see all of the people who we represent and see them equally," she told reporters, later adding regardless of race or geography, "some of the issues are the same issues, because frankly the values are the same, and the challenges are the same for families, especially working families," news agency Associated Press quoted Harris.

Harris' take on Trump's immigration policy has been quite critical, during her first town hall earlier this year, she launched a scathing attack on Trump administration's move to separate children from parents at the border calling it an "immoral" act.

Yesterday I got a tour of an immigration detention facility and visited with the mothers separated from their children. And my heart is broken. These mothers personal stories demonstrate a human rights abuse committed by the United States government. We have to keep fighting. pic.twitter.com/Oto6oE2xAG

"This Administration's immigration policies are outrageous, cruel, and inhumane. Proactively working to break up immigrant families is putting these kids' lives in danger. We need to put a stop to this. Members of the Administration should come to testify on this inhumane policy," Harris tweeted out in May.

This Administration's immigration policies are outrageous, cruel, and inhumane. Proactively working to break up immigrant families is putting these kids' lives in danger. We need to put a stop to this. Members of the Administration should come testify on this inhumane policy.

California's junior senator will not put up a fight for re-election this term, but that hasn't stopped her from campaigning for the Democrats across America.

US media has reported Harris to have raised close to $5 million to help elect Democrats this midterm, adding more sheen to the prospects of her Presidential candidacy.

Former US Vice President Joe Biden has also put his buck on Harris, last month he predicted that the Democrats would win the 40 seats in the House of Representatives, giving them "a slightly better than even" chance of taking the US Senate.

He added that a number of potential Democrats, including Kamala Harris, are seeking nominations and are capable of pursuing "a much more enlightened foreign policy than the President."

The US media described Harris' recent Iowa visit as electrifying, stating that the enthusiasm on her arrival in the state had Obama-like energy. Iowa has recently witnessed a flurry of potential 2020 candidates pass through the state. Despite speculations on her 2020 candidature, Harris has remained tight-lipped on the same with no official comment.

Undeniably, Harris has emerged as a prominent Democrat voice on all major issues that rocked the United States this year. Her term as a US Senator will only come to end in 2022 before which she might eye another feat -- the 2020 Presidential run.