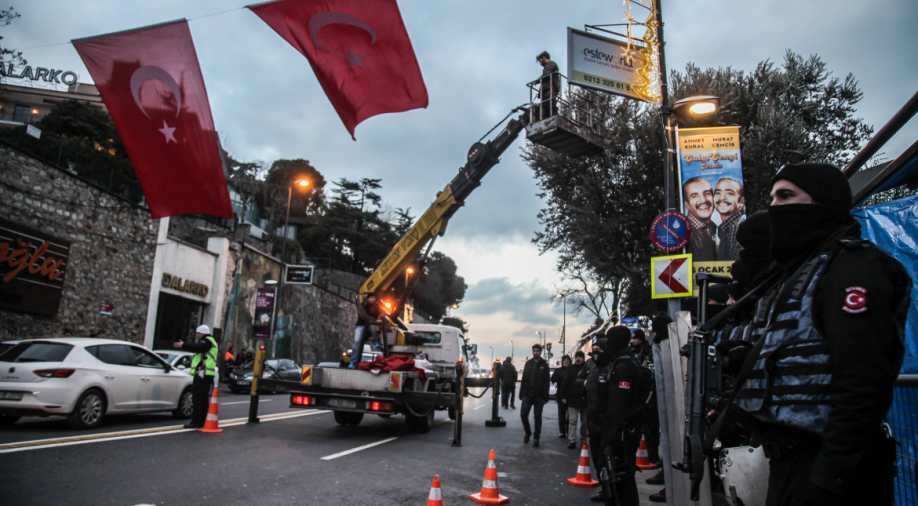 IS took responsibility for the massacre in a statement on Monday, saying it was in response to Turkey's military intervention against the jihadists in war-ravaged Syria. Photograph:( Getty )

Turkey said Wednesday it had identified the gunman behind the New Year's attack on an elite Istanbul nightclub that killed 39, as efforts intensified to catch the suspect before he strikes again.

The assailant stormed the glamorous Reina nightclub on the Bosphorus early on Sunday morning, shooting 120 bullets at terrified partygoers celebrating the start of 2017. Of the 39 dead, 27 were foreigners including citizens from Lebanon, Saudi Arabia, Israel, Jordan, Iraq, Canada and India.

Many of those killed were laid to rest in their respective countries by grieving relatives on Tuesday.

"The identity of the person responsible for the attack has been established," foreign minister Mevlut Cavusoglu said during an interview with state-run Anadolu news agency, without giving any name.

The attack was claimed by the Islamic State (IS) jihadist group, with reports suggesting the authorities suspect the gunman may be from either Kyrgyzstan or Uzbekistan, both ex-Soviet states. There was a flurry of interest surrounding a 28-year-old citizen of Kyrgyzstan who flew out of Istanbul on Tuesday but he was released after questioning in Bishkek. After slipping into the night following the attack, the killer remains on the run.

"Efforts to capture him continue," said Cavusoglu, adding that the house the suspect lived in "has been searched" and that the attack he mounted had been "professionally" planned.

IS took responsibility for the massacre in a statement on Monday, marking the first time it has issued a clear and undisputed claim for a major attack inside Turkey.

The group said it was in response to Turkey's military intervention against the jihadists in war-ravaged Syria where Turkish troops are pressing on with a four-month incursion to oust jihadists from the border area.

Turkish media reported the attacker rented a flat in the central city of Konya before moving to Istanbul to carry out the attack. There were also press reports suggesting he appeared to be well trained in the use of arms and had fought in Syria for IS.

Despite no name made public, police released the first clear images of the attacker earlier this week, including one taken by security cameras on the night of the attack.In the western city of Izmir, at least 20 people including 11 women were taken into custody as part of the investigation into the attack, Anadolu reported.

The new arrests bring the number of those detained to at least 36, including two foreigners detained by Turkish police at Istanbul`s main airport on Tuesday.

One of them was reportedly a woman suspected of being his wife with whom he had stayed in Konya along with two children. Dogan news agency quoted her as saying she was not aware of the attack until it was reported.

On Wednesday, the Haberturk daily said that during his getaway, the gunman took a taxi to an Uighur restaurant in the city's Zeytinburnu district, where he got out and went inside to get money from someone to pay the fare. The restaurant owner told the paper that police had since detained seven of his workers -- all of them Turkic Uighurs from the Xinjiang region of China -- but that he did not know the attacker himself.

The shooting occurred after a bloody year in Turkey in which hundreds of people were killed in violence blamed on both IS jihadists and Kurdish militants.

Turkey is also still reeling from a failed July 15 coup blamed by the government on the US-based Islamic preacher Fethullah Gulen that has been followed by a relentless purge of his alleged supporters from state institutions.

Parliament on Tuesday extended a controversial state of emergency in place since the coup, and which has seen over 41,000 people arrested, by another three months to April 19.