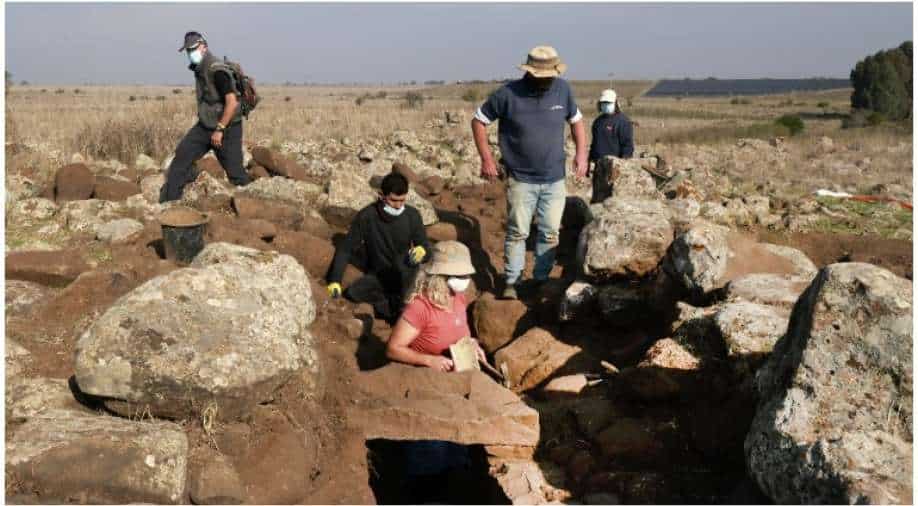 Israel Antiquities Authority (IAA) archeologists work at a fortified complex from the time of King David which was exposed for the first time in archaeological excavations carried out by IAA in the Hispin settlement in the Israeli-annexed Golan Heights on November 11, 2020. Israeli archaeologists unveiled Wednesday a fortified structure in the Israeli-occupied Golan Heights from the time of King David, which sheds light on the borders and size of an ancient kingdom. The 3000-year-old fort, found near the southern Golan community Hispin ahead of works to build a new neighbourhood, is believed to have belonged to the Geshurites, allies of the Israelite king. Photograph:( AFP )

The 3,000-year-old fort, found near the Jewish settlement of Hispin ahead of works to build a new neighbourhood, is believed to have belonged to the Geshurites, King David's allies

Archaeologists on Wednesday unveiled a fortified structure from the time of the King David on the Israeli-occupied Golan Heights that sheds light on the borders of a Biblical Israeli ally. The 3,000-year-old fort, found near the Jewish settlement of Hispin ahead of works to build a new neighbourhood, is believed to have belonged to the Geshurites, King David's allies.

Barak Tzin, who directed its excavation for the Israel Antiquities Authority, estimated that it covered more than 1,000 square metres (a quarter of an acre).

Diggers found a large stone with an engraving of two horned figures stretching out their arms and a statuette of a woman holding a musical instrument, possibly a drum.

"That also links us to finds from the Iron Age," Tzin said, noting similar artefacts uncovered in Bethsaida, "a site linked to the capital of the Geshur kingdom" that lies west of Hispin on the northern shore of the Sea of Galilee.

Tzin said there is source material indicating "family ties" between the Geshur kingdom and the kingdom of David.

The Hispin fortress, the first of its kind to be excavated, adds a rare "piece to the puzzle" of Golan archaeology, Tzin said.

"This phenomenon might be more widespread that we know. Golan research is not yet at a high level... We're only beginning to rediscover the Golan now."

Future finds might help define clearer boundaries for the Geshurite kingdom, while the Hispin fortress "fills out its middle," he said.

"We believe (the kingdom) spread to Syria -- it fills in the space between," he said of the Hispin site.

"The picture is beginning to get a bit more clear."