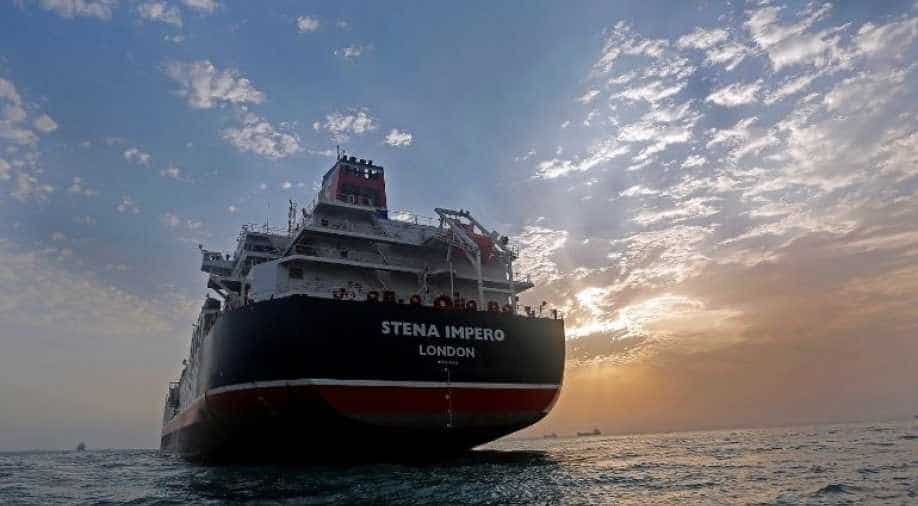 The Swedish-owned Stena Impero was detained by Iran's Revolutionary Guards on July 19 in the Strait of Hormuz waterway for alleged marine violations, two weeks after Britain detained an Iranian tanker off the territory of Gibraltar. That vessel was released in August.

Iran will free seven crew members of the detained British-flagged tanker Stena Impero, Iranian state television reported on Wednesday, although the vessel's owner said it had yet to receive any official confirmation of the release date.

The Swedish-owned Stena Impero was detained by Iran's Revolutionary Guards on July 19 in the Strait of Hormuz waterway for alleged marine violations, two weeks after Britain detained an Iranian tanker off the territory of Gibraltar. That vessel was released in August.

Foreign Ministry spokesman Abbas Mousavi told the TV that the seven, who include Indian citizens, were allowed to leave the tanker on humanitarian grounds and could leave Iran soon.

"We have no problem with the crew and the captain and the issue is violations that the vessel committed," Mousavi said.

The Stena Impero's 23 seafarers are of Indian, Russian, Latvian and Filipino nationality, the vessel's Swedish owner Stena Bulk has said.

"We are very pleased that for seven crew members their ordeal may soon be over, and they may return to their families, however we cautiously await official confirmation of their release date," Erik Hanell, Stena Bulk's president and chief executive, said in a statement.

"We view this communication as a positive step on the way to the release of all the remaining crew, which has always been our primary concern and focus."

The company said the remaining 16 crew members would remain onboard to safely operate the vessel.

Bob Sanguinetti, chief executive of the UK Chamber of Shipping trade association, said Iran had to immediately release the remaining mariners once the seven crew had been freed.

"The ship was in international waters when it was detained and was in full compliance with all navigation and international regulations," Sanguinetti said.

"The Chamber will continue to work with the UK Government to ensure the free passage of ships through the Strait of Hormuz."

Several international merchant vessels have been attacked in the Gulf this year in incidents that have rocked world commodity trading. Washington blames Iran, which denies the accusation.

Iran has denounced US efforts to set up a coalition and says countries in the region can protect waterways and work towards signing a non-aggression pact.

The seizure of the Adrian Darya 1 Iranian tanker exacerbated tensions between Tehran and the West that have been growing since the United States last year quit an international accord curbing Iran’s nuclear program and reimposed economic sanctions.

The Revolutionary Guards said separately on Wednesday that its navy detained seven trawling vessels with 24 foreign crew near the mouth of the Gulf for fishing too close to Iran's coast and other violations, the ISNA news agency reported.

A Guards statement did not give the crews' nationalities, but Iranian media have often carried reports of complaints from local fishermen about Chinese ships active in bottom trawling, which involves dragging a large net across the seafloor.