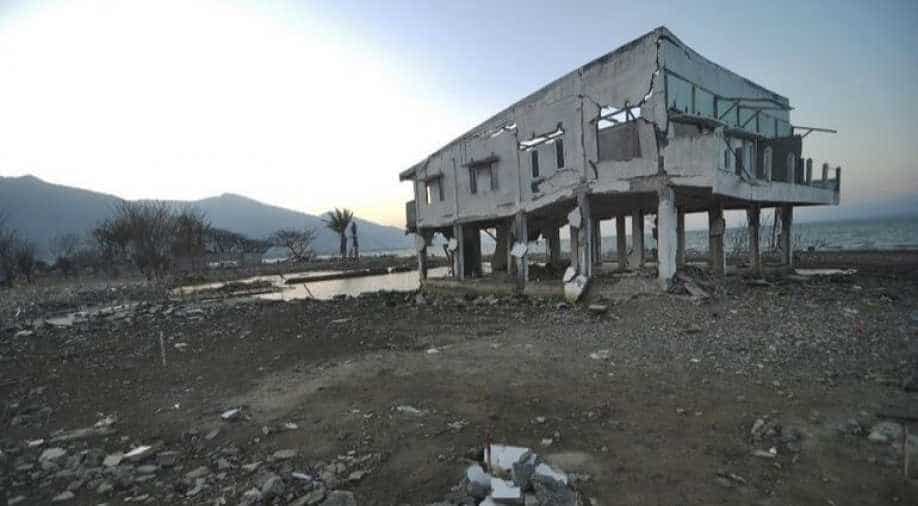 File photo: The remains of a building structure stand on a neighbourhood area affected by liquefaction - a process where the ground starts behaving like a liquid due to the September 28, 2018 earthquake in Palu. Photograph:( AFP )

More than 100 people were also injured and at least 15,000 people had to evacuate because their houses were damaged by the strong jolt.

The death toll from a powerful earthquake that rocked Indonesia's remote Maluku islands has risen to 23, the disaster agency said Friday, as more than 15,000 people were evacuated to shelters.

Terrified residents ran into the streets as buildings fell in around them with the 6.5-magnitude tremor sparking landslides that buried at least one victim on Thursday.

Among the confirmed dead was an infant, with many killed by falling debris in and around quake-struck Ambon city.

"The total number of people who died is 23," national disaster mitigation agency spokesman Agus Wibowo said in a statement.

More than 100 people were also injured and at least 15,000 people had to evacuate because their houses were damaged by the strong jolt, Wibowo said.

Hundreds of houses, offices, schools and public facilities have also been damaged in the disaster. Authorities have set up emergency tents and public kitchen for the evacuees in several districts.

The Southeast Asian archipelago is one of the most disaster-prone nations on Earth.

It experiences frequent seismic and volcanic activity due to its position on the Pacific "Ring of Fire", where tectonic plates collide.

Nearly 60,000 people are still living in makeshift accommodation nearly a year after the double disaster, the Red Cross said this week.