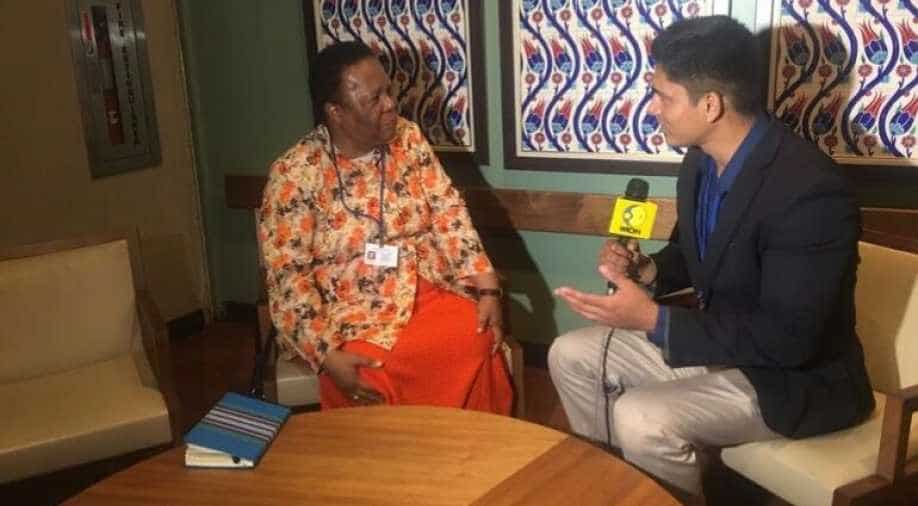 'India is certainly beginning to lead the way in showing what some solutions are,' the South African foreign minister told WION.

South Africa has lauded India's role in climate solutions and said the relationship between the two countries is strengthening. Speaking to our diplomatic correspondent Sidhant Sibal in New York, South Africa's Foreign Minister Naledi Pandor said that India is certainly beginning to lead the way in key solutions to world problems. He also called Mahatma Gandhi a South African hero.

Below is the full transcript of the conversation

WION: What is the status of the ties between India and South Africa?

Naledi Pandor: The ties are extremely strong. India and South Africa are old friends, we have a lot of South Africans whose families originated in India. Their roots are still in India.

India also supported South Africa in the struggle for freedom. India has been a good friend of South Africa during the freedom [struggle], we continued to be partners in BRICS family and the relations are strengthening every year.

WION: India is celebrating the 150th birth anniversary of Mahatma Gandhi. How do you see it?

Naledi Pandor: I think that it is very important for countries to commemorate leaders who have founded our democracies but who have also made an important contribution to the world political philosophy. Mahatma Gandhi, with his wonderful attention to non-violent struggle made a deep impression on our leaders like Nelson Mandela and in fact was a precursor to the concept of mass mobilisation which influenced much of the struggle for freedom in South Africa. So Mahatma stands for us as a great example and is remembered in South Africa as a hero of South Africa as much as he is considered a Mahatma in India.

WION: India has been focusing on providing a solution to the climate change issue... how do you see India's role?

Naledi Pandor: Well, I think that India is certainly beginning to lead the way in showing what some solutions are and the speech that was made by Prime Minister Modi during the Climate Change Summit in the UN was a very important speech where he reported on the steps being taken by the government of India in order to address what is a massive global challenge. Solar energy, renewable sources of energy of all kinds, are very important. We are using solar, renewable, as wells as biomass as new sources of energy and of course India is renowned in advances in innovation, so we look forward to our collaboration with India to build even more solutions to climate change challenges that confront us. India has agriculture as one of the core basis of its economy, and similarly, South Africa relies on agriculture. We have to look at land recovery, new technology and at how to best use our water resources in order to respond to the challenges of climate change.

WION: You met with BRICS foreign ministers. What was the focus?

Naledi Pandor: Well, I think that BRICS is an extremely important grouping because it holds up the values of cooperation and of multilateralism. For me, BRICS is a progressive global forum of countries that have among the largest populations in the region and that play a very important role both in regional affairs as well as world affairs. I believe the work that is being done in BRICS is going to illustrate to the world the value of partnership and collaboration. Our deliberations as foreign ministers went very well today. We got a report from Brazil, which is the current BRICS chair and we will have the summit in November. We also got the indication from Russia, who will assume the chair in 2020 as to what their plans and thinking are for their year of chairing the BRICS family.

WION:  What is your view on the Indo-Pacific concept?

Naledi Pandor:  We are members of IORA which is the Indian Ocean Rim Association. South Africa has been playing the leadership role there, this brings many nations together and I think that whatever we do with the oceans, we need to understand that we are drawing together many nations because I think oceans are a shared resource and they don't belong to a particular country. Therefore, whatever we do, any alliance that we build must understand these needs to be inclusive alliances who are all surrounded by the ocean benefit from it.