Impeachment probe: Trump attacks US diplomat on Twitter as she testifies that his words in Ukraine call made her feel threatened 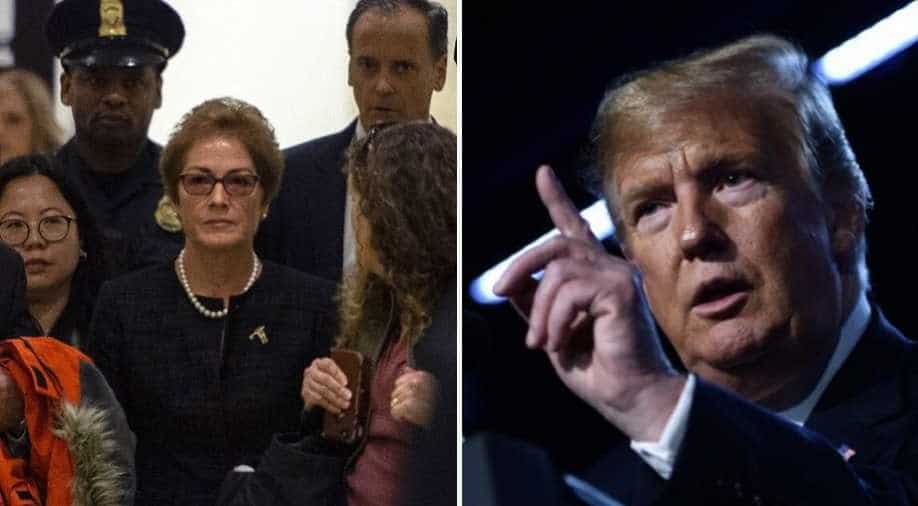 As Yovanovitch testified, Trump fired off criticism of her on Twitter, saying: "Everywhere Marie Yovanovitch went turned bad. She started off in Somalia, how did that go?"

US President Donald Trump launched an extraordinary Twitter attack on a former US ambassador to Ukraine on Friday (November 15) as she testified to an impeachment hearing in Congress, a move she called "very intimidating."

Marie Yovanovitch, a career diplomat who the Trump administration removed from her post earlier this year, defended her anti-corruption record during the hearing and said her removal had left US policy there in disarray.

As Yovanovitch testified, Trump fired off criticism of her on Twitter, saying: "Everywhere Marie Yovanovitch went turned bad. She started off in Somalia, how did that go?"

Everywhere Marie Yovanovitch went turned bad. She started off in Somalia, how did that go? Then fast forward to Ukraine, where the new Ukrainian President spoke unfavorably about her in my second phone call with him. It is a U.S. President’s absolute right to appoint ambassadors.

In the most dramatic moment of the impeachment hearings so far, the Democratic chairman of the House Intelligence Committee Adam Schiff then asked Yovanovitch for her reaction to the tweet. She said it was "very intimidating."

"I can't speak to what the president is trying to do, but I think the effect is to be intimidating," she said.

The session before the House of Representatives Intelligence Committee is part of the Democratic-led impeachment enquiry that threatens Trump's presidency even as he seeks re-election in November 2020.

Yovanovitch was removed from her post as ambassador to Kiev in May after coming under attack by Trump's personal lawyer, Rudy Giuliani, at a time when he was working to persuade Ukraine to carry out two investigations that would benefit the Republican president politically.

Democrats are looking into whether Trump abused his power by withholding $391 million in US security aid to Ukraine as leverage to pressure Kiev to investigate former Vice President Joe Biden, who is a leading contender for the Democratic nomination to take on Trump in the 2020 election.

The main focus of the impeachment inquiry is a July 25 phone call in which Trump asked Ukrainian President Volodymyr Zelenskiy, who was elected in May, to open the investigations.