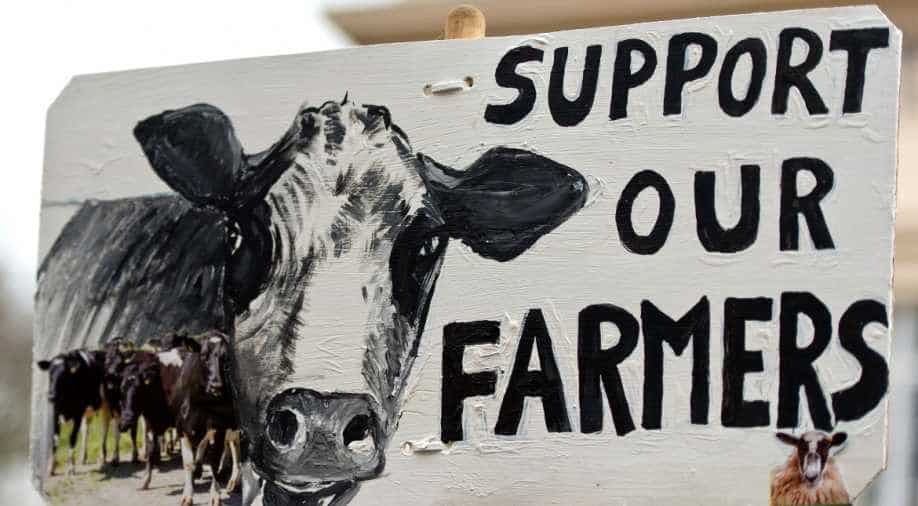 A protester waves a banner with the slogan 'Support Our Farmers' during a Farmers for Action protest on March 23, 2016 in London, England. Photograph:( Getty )

Hundreds of small Argentine farm producers and mostly indigenous workers marched on Buenos Aires Friday (November 4) to demand better working conditions as centre-right President Mauricio Macri looks to promote growth. As is their custom in these protests against austerity under centre-right president, Mauricio Macri, they handed out free produce.

They set out from different areas in the country such as the northeast, Cuyo, and Patagonia in the south days earlier. They ultimately gathered in the central Plaza de Mayo in front of the Casa Rosada government house.
The farmers donated vegetables to highlight their poor working conditions and demand help from the government.

They also are protesting hunger and lack of labour flexibility for production, land, housing and small and medium producers, among other issues.

The protesters are aiming to bring their claim to several ministerial delegations and secretariats including Agribusiness, Social Development, Labour and Housing, local media reported.

Strikes and other labour protests have been common in Argentina under centre-right president Mauricio Macri, where high inflation have prompted wage increase demands from workers wary of losing purchasing power.

"We have been fighting a long time for the restitution of the land of small producers, and lands of indigenous peoples. Today we are present here to tell this government of Macri, we do not want him to forget us small producers, because that is what he is doing, he is opening for imports and we can't survive with the production we have here," said a representative of the national peasant farmers federation, Roberto Solano.

The main demands for the sector revolve around the regulation of minimum and maximum prices for small farmers (price support), soft loans for the same payment facilities, and a land policy for the access of small producers, farmers and original communities, according to local media reports.

An array of organisations took part in the national protest.

"We suffer hunger, suffer from health, education, lack of housing, production, where we have abdanoned fields, but when they politicians arrive from here, from the capital (Buenos Aires), they come to our territory and they treat us as brothers, but when they get into government, they forget about us," said Bernardo Sosa, a Wichi indigenous person.

The government has faced a series of protests in recent months as frustration grows over the economy. Macri was elected president late last year on a platform of attracting international investment and stimulating growth by ditching the heavy market controls established by the previous centre-left government.

Macri says he is ridding Latin America's number three economy of distortions caused by the interventionist policies of his predecessor, Cristina Fernandez. The economy is still shrinking though and inflation, while slowing, remains in the double digits.