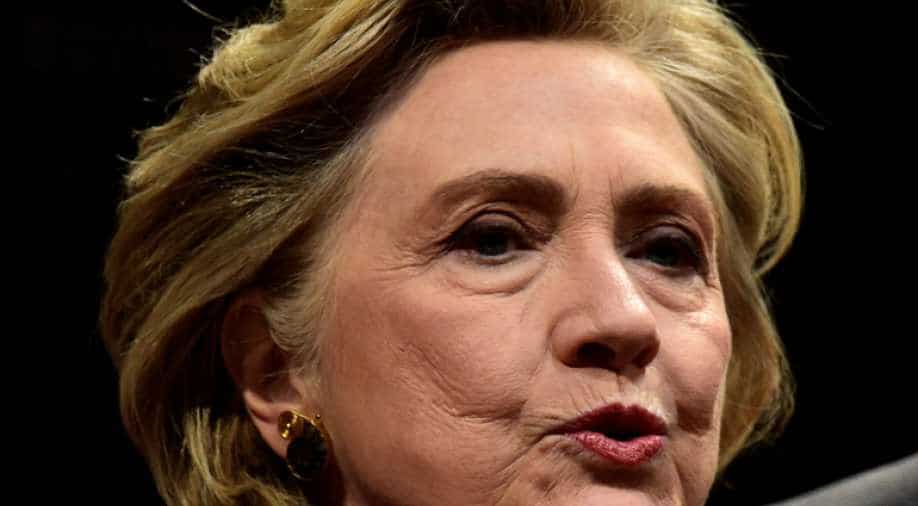 Former US presidential candidate Hillary Clinton said on Wednesday that "cavalier" threats to start a war on the Korean peninsula are "dangerous and short-sighted", urging the United States to get all parties to the negotiating table.

Clinton also called on China to take a "more out front role" in enforcing sanctions against North Korea aimed at curbing its missile and nuclear development.

"There is no need for us to be bellicose and aggressive (over North Korea)," said Clinton at a forum in the South Korean capital Seoul, stressing the need for greater pressure on North Korea and diplomacy to bring Pyongyang to talks.

Tensions between Pyongyang and Washington have soared following a series of weapons tests by North Korea and a string of increasingly bellicose exchanges between US President Donald Trump and North Korean leader Kim Jong Un.

"Picking fights with Kim Jong Un puts a smile on his face," Clinton said, without mentioning Trump by name.

The war of words has seen Trump call the North Korean leader "little rocket man" on a suicide mission, and vowed to destroy North Korea if it threatens the United States or its allies. North Korea has in turn called Trump "mentally deranged" and a "mad dog".

Talks between the adversaries have long been urged by China in particular, but Washington and its ally Japan have been reluctant to sit down at the table while Pyongyang continues to pursue a goal of developing a nuclear-tipped missile capable of hitting the United States.

North Korea’s Deputy UN Ambassador Kim In Ryong told a UN General Assembly committee on Monday that the situation on the Korean peninsula was now touch-and-go point "and a nuclear war may break out any moment".

Clinton, a former US secretary of state, said Washington's allies have increasingly been expressing concerns over the reliability of the United States, advising Washington to avoid becoming distracted with North Korean threats and be "as forcefully patient" as possible.

Regarding China's role in reining in North Korea, Clinton said Beijing would be better off trying to "tighten and absolutely enforce sanctions" against North Korea.

North Korea's relationship with its main ally and trading partner China have been strained by the rapid pursuit of its weapons programmes, with many of Pyongyang's recent tests coinciding with major Chinese events.

There had been fears that North Korea would conduct another test to coincide with the start of China's five-yearly party congress on Wednesday. Instead, Pyongyang sent Beijing a congratulatory message.

The central committee of the North's ruling Workers' Party of Korea said China had made "great progress in accomplishing the cause of building socialism with Chinese characteristics" under the guidance of the Communist Party of China.

"We are greatly pleased over this," the party central committee said in the message carried by the official KCNA news agency, adding that it "sincerely wished" the China congress "satisfactory success."

Can't have it both ways

Clinton said China's retaliatory actions against South Korean companies doing business in China following the deployment of a US anti-missile system in South Korea would be unnecessary had Beijing done a better job containing and deterring North Korea.

China has been curbing South Korean businesses there since Seoul decided to deploy the Terminal High Altitude Area Defence (THAAD) system, saying its powerful radar could be used to pierce its territory. South Korea and the United States have repeatedly told China that THAAD aims only to defend against North Korea's missile threats.

"The Chinese can't have it both ways. They can't do less than they could to tighten economic pressures on North Korea and same time discount the real threat South Korea and its citizens face," she said.