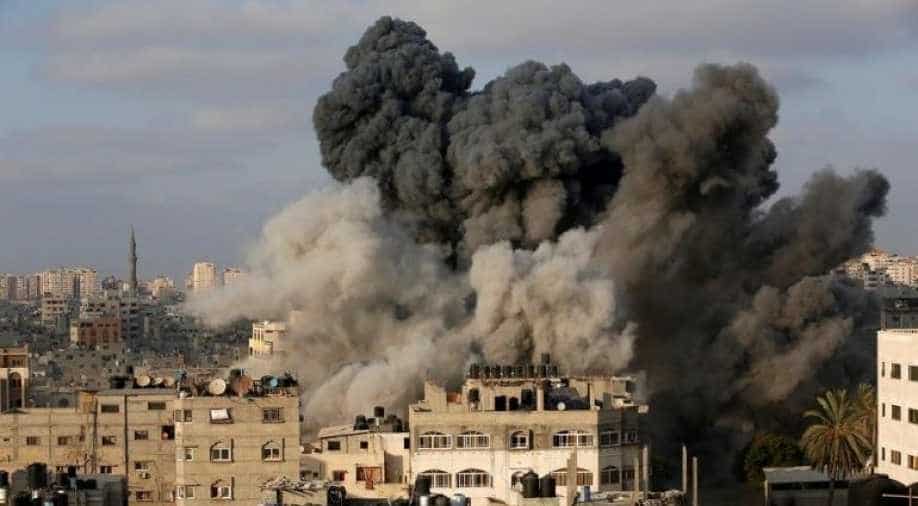 Financial aid from gas-rich Qatar has been a major component of a truce first agreed more than a year ago and renewed several times since.

Gaza's Islamist rulers Hamas said Monday they had reached a Qatari-mediated deal with Israel to end more than three weeks of cross-border attacks.

In the latest escalation, Israel has bombed Gaza almost daily since August 6 in response to airborne incendiary devices and, less frequently, rockets launched across the border.

The fire bombs -- crude devices fitted to balloons, inflated condoms or plastic bags -- have triggered more than 400 blazes and damaged swathes of farmland in southern Israel, according to the fire brigade.

An Egyptian delegation had been shuttling between the two sides to try to broker the renewal of an informal truce under which Israel committed to ease its 13-year-old blockade of Gaza in return for calm on the border.

The delegation was joined by Emadi, who also held talks with Israeli officials in Tel Aviv.

In a statement, he praised the Hamas leadership for reaching a deal in light of the "difficult conditions of Gaza's inhabitants, especially in view of the spread of the coronavirus".

A Hamas source told AFP there had been "a total halt" to balloon and other attacks against Israel, in agreement with other factions in the coastal strip, home to some two million people.

"Fuel supplies will return and the power station will be restarted from Tuesday," the source said.

A punitive Israeli-imposed ban on fuel deliveries cut electricity to just four hours a day, supplied from the Israeli grid.

COGAT, the Israeli defence ministry unit that oversees civilian affairs in the occupied Palestinian territories, said in a statement that after "efforts to calm the situation", it would "resume the routine activity of the Kerem Shalom Crossing, including the entry of fuel products", starting Tuesday.

"In addition, the fishing zone of the Gaza Strip will be expanded to 15 nautical miles," it said.

But, COGAT warned: "If Hamas, which is accountable for all actions that are taken in the Gaza Strip, fails to stand (by) its obligations, Israel will act accordingly."

The Hamas source added that work would be allowed to start on the construction of a new power line, while a $30 million Qatari aid tranche for Gaza would be expanded to $35 million, with the difference used to cover public servants' salaries.

Financial aid from gas-rich Qatar has been a major component of a truce first agreed more than a year ago and renewed several times since.

The fire balloons launched in recent weeks were widely seen as an attempt by Hamas to improve the terms of the informal deal.

Sources close to Hamas had said it also wanted other measures to ease living conditions in the territory, including the extension of an industrial zone in the east and an increase in the number of Israeli work permits issued to Gazans once anti-coronavirus restrictions have been lifted.

But disagreements over implementation have fuelled repeated flare-ups with the Islamist group, which has controlled Gaza since 2007.

Such flare-ups escalated into full-blown conflicts in 2008, 2012 and 2014, and mediators have been working to prevent a new war.