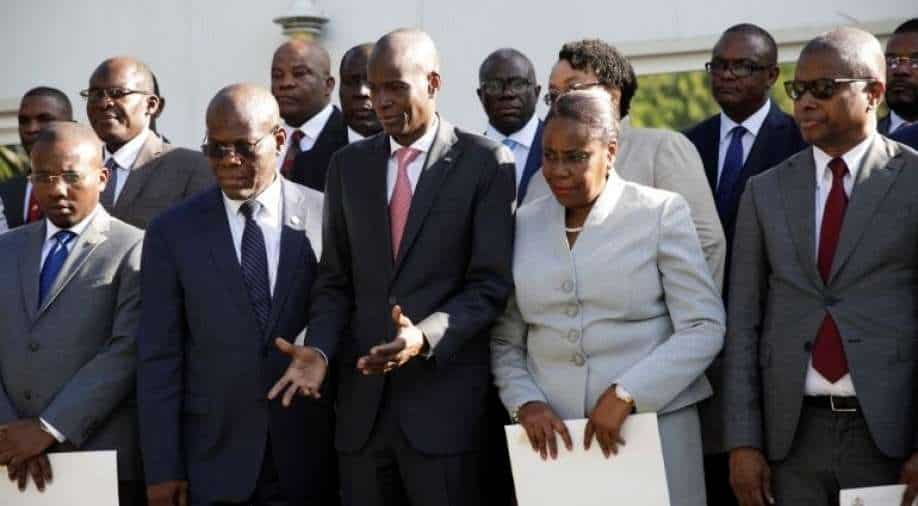 Haiti's President Jovenel Moise reacts next to Prime Minister Joseph Jouthe (C-L) after posing for a picture at the end of Jouthe's inauguration ceremony in the National Palace of Port-au-Prince, Haiti Photograph:( Reuters )

Prime Minister Joseph Jouthe told a news conference at his private residence that a senior police official was also among the 23 people detained with money, guns and ammunition

Haitian authorities on Sunday arrested nearly two dozen people, including a Supreme Court judge, for their role in an alleged plot to oust President Jovenel Moise that has exacerbated political tensions in the troubled Caribbean country.

Prime Minister Joseph Jouthe told a news conference at his private residence that a senior police official was also among the 23 people detained with money, guns and ammunition.

"These people had contacted national palace security officials, high-ranking officers of the national palace whose mission was to arrest the president ... and also to facilitate the installation of a new president," Jouthe said, speaking alongside the minister of justice and the chief of police.

President Moise, speaking later at the Port-Au-Prince airport on his way to launch the annual carnival in the coastal town of Jacmel, said the plotters' aim was to make an "attempt on my life".

The arrests come after leading opposition figures this week announced a plan to replace Moise with a new head of state, accusing the president of being authoritarian and presiding over economic chaos in the Western hemisphere's poorest country.

Earlier on Sunday, anti-government demonstrators in Port-Au-Prince clashed with police, who responded with tear gas. There were also street protests against Moise in some other towns.

The opposition plan called for members of civil society and opposition leaders to pick a new president from one of the sitting Supreme Court judges, instead of waiting for general elections scheduled for September.

Moise, who has ruled by decree since mid-January, has stated he would hand over power to the winner of the elections but would not step down until his term expires in 2022.

The US government on Friday urged talks to resolve the crisis while underlining "a newly elected president should succeed President Moise when his term ends on February 2nd, 2022."

Moise has also put in place plans to hold a referendum on amending the constitution in April, with the opposition voicing concerns the vote will not be free or fair and could give Moise too much power.

Haiti has been badly hit by a crippling economic crisis made worse by the coronavirus pandemic.

The country has also been paralyzed over the past year by a spike in kidnappings and a sharp rise in overall crime, which has weighed on the economy and dealt a huge blow to the quality of life for ordinary people.