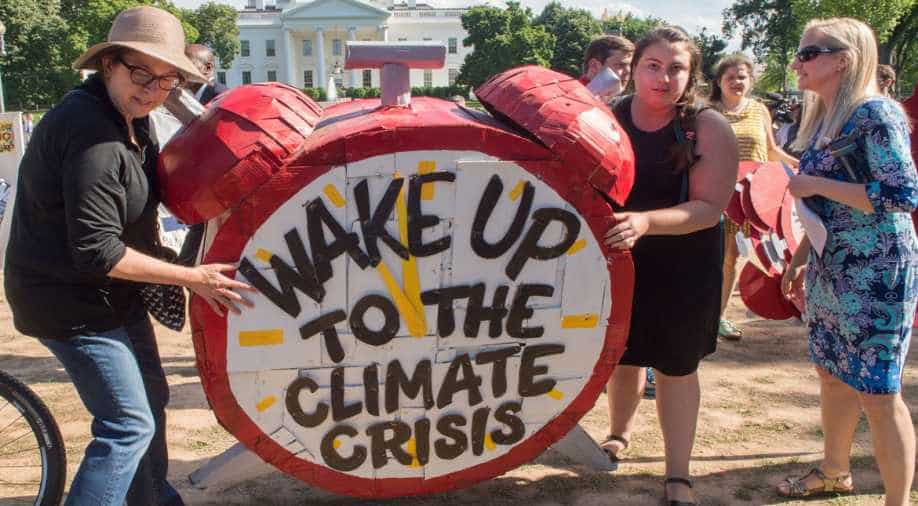 Protesters hold up signs during a demonstration Photograph:( AFP )

In a gruelling six-hour meeting that ended in the small hours, they agreed that businesses will pay $28 per tonne of carbon they use from January 2021.

In a gruelling six-hour meeting that ended in the small hours, they agreed that businesses will pay 25 euros ($28) per tonne of carbon they use from January 2021 -- more than double the initially proposed rate.

The new rate -- fiercely opposed by business lobbies -- is set to increase to 55 euros per tonne by 2025, before eventually being incorporated into an EU-wide carbon trading system.

The package, which also includes plans to reduce rail prices and raise taxes on air travel, was broadly approved by both chambers of the German parliament last month.

Yet a dispute over the cost of the new policies meant that regional representatives in the upper house blocked certain elements of the bill, forcing the government and federal states to return to the negotiating table.

Merkel's government has faced criticism since it presented the new climate package in September, with environmental NGOs and opposition parties claiming it lacks ambition.

Annalena Baerbock, co-leader of the opposition Green Party, said "much, much more" was necessary after Monday's breakthrough.

"For the energy transition to succeed, significant investments are needed from businesses and households," he added, warning politicians "not to keep restricting the necessary freedom of action".

Wolfgang Grosse Entrup of the VCI chemical industry federation said "the warning light is blinking red for competitiveness" after the carbon price decision.

"Politicians can't sell companies that are in international competition down the river," he urged, calling also for a compensation mechanism.