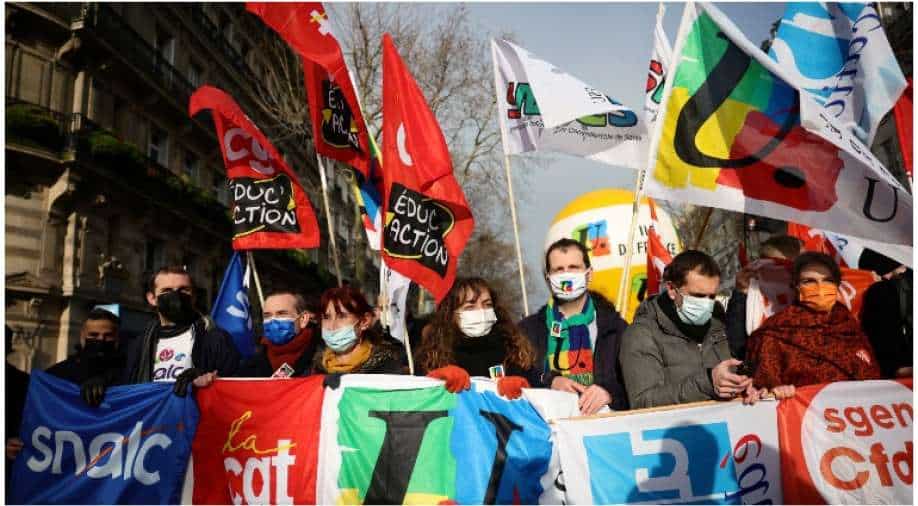 French teachers attend a demonstration as part of a nationwide day of strike and protests against sanitary conditions in schools, in Paris amid the rise of coronavirus disease (COVID-19) cases due to the Omicron variant in France, January 13, 2022. Photograph:( Reuters )

Covid rules for schools have seen too many changes in France enraging teachers, parents and school directors

France faced biggest strike of teachers as tens of thousands of educators walked off the job on Thursday and marched on streets protesting the government's Covid strategy for schools. They demanded better protection for pupils and staff against infection

"Stop your contempt," and "We're fed up with tests" teachers proclaimed on banners in rallies across France, calling for the government to provide them with FFP2 face-masks and to stop changing the rules so often.

Covid rules for schools have seen too many changes in France enraging teachers, parents and school directors

New testing requirements announced a day before schools restarted after the Christmas holidays and changed twice since increased the anger.

"We had reached such a level of exasperation, tiredness, and anger that we didn't have any other option but to organise a strike to send a strong message to the government," said union leader Elisabeth Allain-Moreno.

Many at the rallies called for the resignation of Education Minister Jean-Michel Blanquer. A government source said he was unlikely to lose his job so close to April's presidential election.

Prime Minister Jean Castex will, however, meet teachers' representatives later on Thursday, his office said, in a sign the government was keen to try and quell their anger.

The government has so far stood by its policy to keep classes open and requiring all pupils in contact with an infected person to get tested three times. Some degree of complication is the price to pay to keep schools open, it said.

"I know it's tough, but a strike does not solve problems. One does not strike against a virus," Blanquer told BFM TV earlier this week.