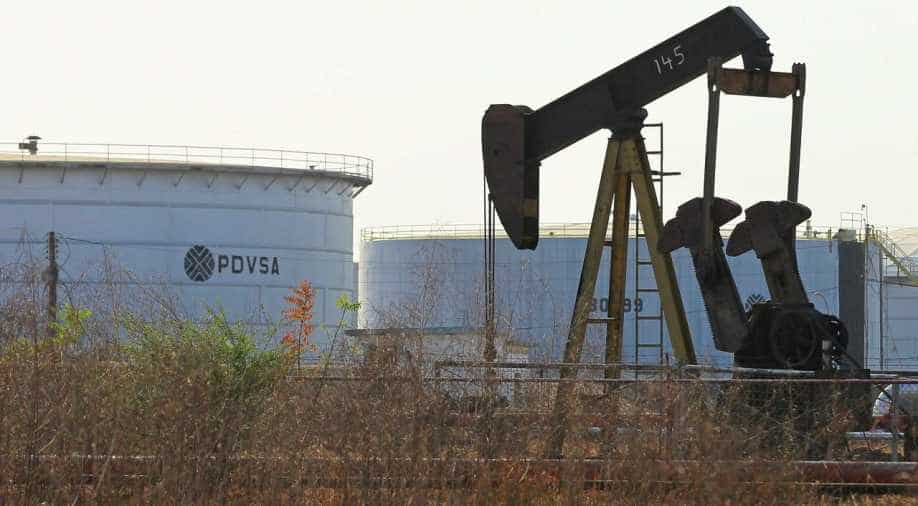 The FBI is probing several Mexican and European companies allegedly involved in trading Venezuelan oil as it gathers information for a US Treasury Department inquiry into possible sanctions busting, according to four people familiar with the matter.

The sanctions are part of a campaign by Washington to strangle the revenues of President Nicolas Maduro, which has failed to break his grip on power. US officials say privately that is a source of frustration for President Donald Trump, whose administration has tightened the implementation of sanctions in recent months.

Three of the people who provided information to the FBI - who asked for anonymity to discuss the matter - said the agency was investigating three Mexican companies: Libre Abordo, Schlager Business Group, and Grupo Jomadi Logistics & Cargo.

Reuters could find no record of Venezuelan oil purchases by those companies prior to sanctions.

The three people also said the FBI was gathering information on two Europe-based oil trading companies that do have a track record of dealing in Venezuelan oil or selling fuel to PDVSA: Elemento Ltd and Swissoil Trading SA.

One of the sources familiar with the matter in Washington said any action against the Mexican and European companies could be postponed or cancelled if the firms had already halted trade with Venezuela.

The three others said the probe by the Treasury and the State departments could potentially lead to action in the coming weeks if they discovered a violation of sanctions.

A spokesman for the US Department of Justice, which handles media enquiries for the FBI, declined to comment, as did a State Department spokesperson. The Treasury Department did not reply to a request for comment.

Emails and phone calls seeking comment from Swissoil went unanswered. Emails sent to an address on Jomadi's website bounced back.

Law firm Holman, Fenwick & Willan (HFW), representing Elemento, said in a letter to Reuters after this story was published on May 13 that its client "is not aware of any investigations into it or its business" by the FBI, the US Treasury's Office of Foreign Assets Control (OFAC) or any other body.

"Our client does not currently trade oil of Venezuela origin or sell fuel to PDVSA," it said, adding that Elemento does not have any intention of doing so in the future. "Our client goes to great lengths to ensure that its business activities comply with applicable rules, regulations and sanctions, including obtaining legal advice."

Elemento and its lawyers did not respond to requests for comment prior to publication of the May 13 story.

In a lawsuit in January 2020 in a British court, Tansy Shiptrade Inc alleged Elemento had used its name without permission to load a cargo of about 2 million barrels of Venezuelan crude in December 2019, according to a judge's ruling refusing Elemento’s request to be allowed to sell the oil.

The judgement said Elemento had admitted using Tansy's name to receive the cargo but that Elemento had said it had permission to do so and had asserted that Swissoil had acted as its agent in the trade.

According to the judge's ruling, Richard Rothenberg, Elemento's chief financial officer, said in an affidavit that between 2016 and 2019 the firm carried out Venezuela-related trades as part of an agreement with US-based Castleton Commodities International (CCI).

While CCI ceased its involvement due to US sanctions imposed on Venezuela in early 2019, Elemento did 13 more trades on its own after that date, Rothenberg said, according to the ruling. He did not provide dates for the trades.

Reuters was unable to immediately reach Rothenberg for comment. CCI said Elemento was its counterparty on petroleum trades until early 2019, but the US commodities firm said it ceased its trading participation before the January 2019 sanctions on PDVSA.
Reuters could not establish subsequent trading in Venezuelan oil by Elemento and Swissoil following the disputed cargo, aboard Liberia-flagged tanker Respect.

Libre Abordo and its affiliate Schlager said in a statement to Reuters, citing legal experts they hired, that two contracts they signed in June 2019 with Venezuela's Corporation for Foreign Trade (Corpovex) to provide food and water trucks in exchange for Venezuelan crude - known as an oil-for-food agreement - were permitted under the sanctions as long as no cash payment reached Maduro's government.

"Neither Libre Abordo nor shipping companies hired to move PDVSA's hydrocarbons are the subject of sanctions," read the statement.

The firms declined to identify the legal experts but provided Reuters with their interpretation of Venezuela sanctions, which the companies said they sent to several shipping firms and other partners.

The undated memorandum said the oil-for-food deal did not contravene US measures because Corpovex was not specifically named on the Treasury Department's list of sanctioned people and entities, unlike PDVSA, and because there were exceptions under the sanctions for humanitarian goods.

Neither Corpovex, PDVSA nor Venezuela's trade ministry responded to requests for comment.

The two small Mexican companies have emerged as the largest middlemen for Venezuelan oil in recent months, according to internal PDVSA export documents, reviewed by Reuters.

OPEC member Venezuela has come to rely on trading oil and gold to pay for essential imports using complicated swap agreements because Washington's sanctions bar Maduro's government from using the US financial system.

The PDVSA export documents show that Libre Abordo and Schlager have quickly ramped up trading of Venezuelan oil since receiving a first cargo in December, after a second wave of US sanctions in August 2019 barred non-US oil companies from doing business with PDVSA.

These secondary sanctions blocked the US property of anyone worldwide "materially assisting" Venezuela's government, including PDVSA and other governmental bodies - though it did not specifically name Corpovex. While the measures permitted shipments of food, clothing and medicines, none of the Venezuela-related executive orders issued by Trump specifically allowed oil-for-food agreements.

Whether that ambiguity potentially has created a loophole for companies is a matter of disagreement, some experts said.

Richard Nephew, a senior researcher at Columbia University's Center on Global Energy Policy and a former State Department official dealing with sanctions policy toward Iran, said that while food deals were permitted under sanctions there was no special dispensation for them to be paid for in oil and the involvement of PDVSA could still prompt Treasury to take action.

However, Peter Harrell, an expert on sanctions at the Center for a New American Security (CNAS), said that in oil-for-food swaps the companies ultimately supplying the food could be protected from sanctions provided they had no role in physically receiving, transporting or selling the oil.

Harrell added that some US policymakers might be reluctant to impose sanctions on companies involved in a deal to supply basic goods to a nation suffering a humanitarian crisis.

"Policymakers will be concerned that sanctioning an oil for food barter would play into a...narrative that US sanctions are causing humanitarian challenges in Venezuela," Harrell said.

The third Mexican company, Grupo Jomadi, held talks with PDVSA to swap 5 million barrels of Venezuelan crude for imports of gasoline, according to an unsigned contract dated in March reviewed by Reuters. Venezuela's refineries have long been crippled by outages, and the country has suffered dire shortages of fuels since the sanctions were imposed.

Two sources told Reuters that Jomadi may have reached an agreement on the swap deal as a crude cargo that departed from Venezuela in April appeared to form part of it, according to the initial information collected by US authorities. Neither Jomadi nor PDVSA responded to requests for comment.

Reuters was unable to independently confirm if the swap deal took place.

While the FBI's principal focus is on domestic intelligence and security, its agents also carry out overseas investigations to aid decisions on sanctions by the Treasury Department's Office of Foreign Assets Control, which often also seeks input from the State and Commerce departments, US embassies and the intelligence community.

Libre Abordo and Schlager's oil-for-food deals with Venezuela obliged them to deliver 1,000 water trucks and 210,000 tonnes of corn to the country, the companies said. While some of the trucks have been delivered, the firms said they have not so far supplied any of the food as low oil prices have affected the original delivery schedule.

In exchange, they have so far received more than 26 million barrels of Venezuelan oil for resale, according to PDVSA's export documents.

In just four months, Libre Abordo and Schlager increased their intake of PDVSA's oil from less than 3% to 39% of the Venezuelan company's total exports, which averaged 850,000 barrels per day in April.

The agreements threw a lifeline to Maduro, whose administration is struggling to afford imports of everything from food to medicine and industrial equipment.