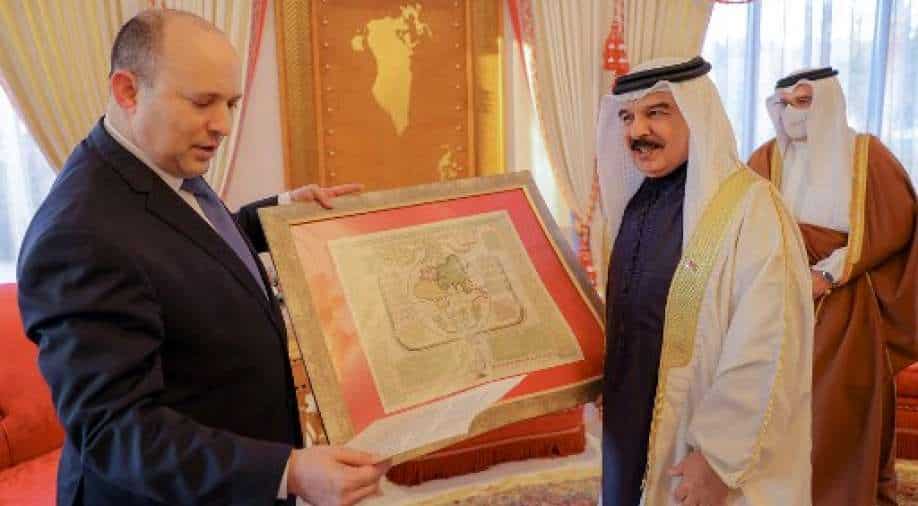 Bennett said that his landmark visit to Bahrain offered a 'new model' of Israeli-Arab relations, part of a goal of creating a regional 'ring of alliances'

Bennett said that his landmark visit to Bahrain offered a “new model” of Israeli-Arab relations, part of a goal of creating a regional “ring of alliances”.

“This was a very successful visit, warm reception, strong connection, very open atmosphere,” Bennett said at the end of his visit, 17 months after Israel and Bahrain ended decades of tensions to normalise ties.

According to the Prime Minister’s Office, the Bahraini monarch hailed the “historic day,” noting Bennett is the first Israeli premier to visit the kingdom.

“Because of [Bennett’s] determination and leadership, this was a productive and successful visit,” he was quoted as saying in a statement. “I thank you for coming here.”

Bennett’s office said his tete-a-tete with the king extended beyond the allotted time, leaving no time for their teams to meet.

The meeting comes at a time when several Western countries are holding talks in Vienna on discussing the resumption of the 2015 Iran Nuclear deal.

Israel has also sent its diplomats to Vienna even though it is not part of the negotiations.

While the presence of Israel in the talks has angered Iran, Jerusalem maintains that lifting sanctions on Tehran would enable it to fund nuclear programmes, putting the Arab and West Asian regions in jeopardy.

The 2015 deal offered Tehran sanctions relief in exchange for curbs on its nuclear programme, but the US unilaterally withdrew in 2018 under then-president Donald Trump and reimposed stiff economic sanctions, prompting Tehran to begin rolling back on its commitments.

(With inputs from Jodi Cohen)