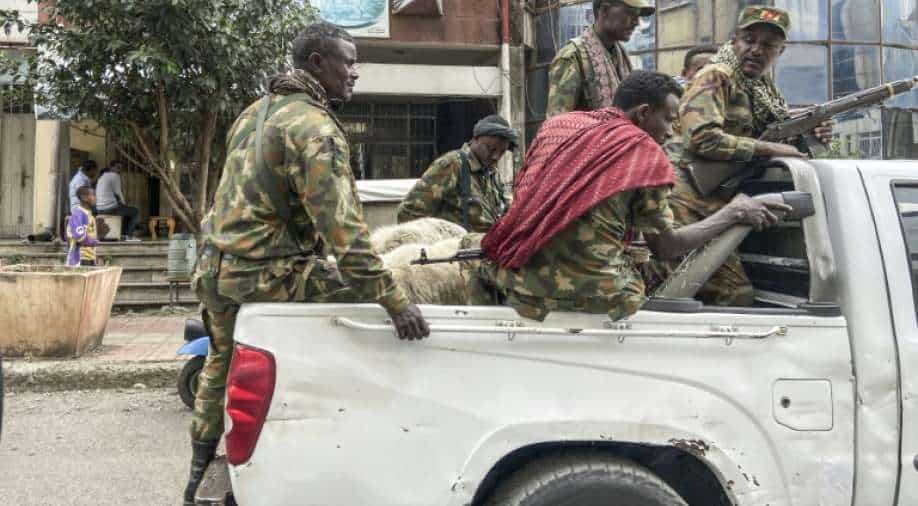 Soldiers with the Tigrayan forces in Mekelle, the capital of Tigray region, Ethiopia Photograph:( AFP )

Ethiopia said Saturday that forces loyal to the ruling party in the northern Tigray region had fired into neighbouring Amhara region, raising fears that ongoing fighting could draw in other parts of the country.

"In the late hours of Nov. 13, 2020, a rocket was fired towards Bahir Dar & Gondar cities. As a result, the airport areas have sustained damages," a government statement said.

"The TPLF junta is utilising the last of the weaponry within its arsenals," the statement said, referring to the Tigray People's Liberation Front, the Tigray ruling party.

The airports in both Bahir Dar, the regional capital, and in Gondar are used by both military and civilian aircraft.

Residents also reported hearing gunfire in both cities Friday night, though an Amhara regional government statement said "the situation was controlled within a few minutes" and "our cities are in peace".

Hundreds of people are reported to have been killed, some in a gruesome massacre reported by Amnesty International, and thousands have fled fighting and air strikes in Tigray, whose leaders Abiy accuses of seeking to destabilise the country.

Tigray has been under a communications blackout since the operation began, making it difficult to verify claims from both camps about the situation on the ground.

Military officials have vowed to keep the conflict contained in Tigray, and Abiy has repeatedly promised a quick, decisive victory.

But Amhara and Tigray are embroiled in long-running disputes over land along their shared border that analysts worry could draw Amhara into the conflict.

Thousands of Amhara militiamen have already headed towards Tigray to fight alongside federal forces, according to Amhara security officials.

One resident of Bahir Dar told AFP there were "two heavy explosions around 10:50 pm".

"After that there was gunfire for 15 minutes, and then it went quiet," the resident said.