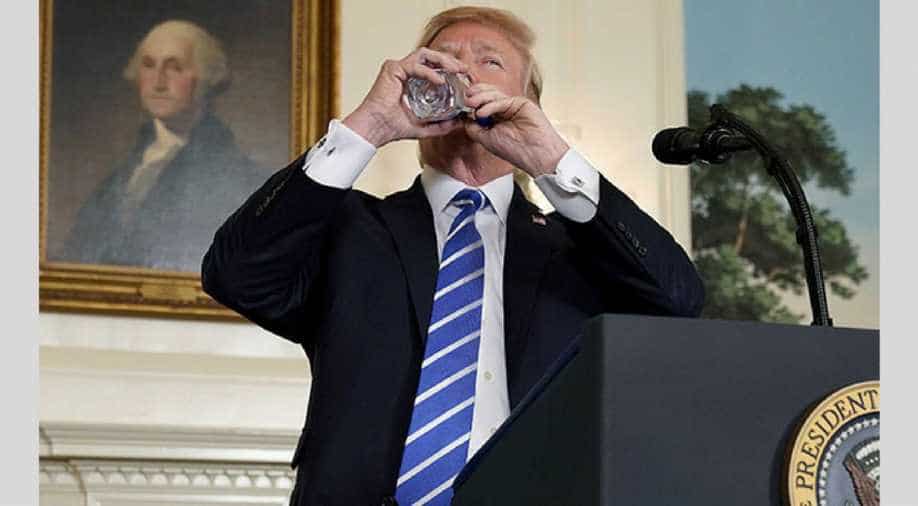 The US President Donald Trump has a knack for making it to news and this time he was seen awkwardly reaching for a water bottle during a televised speech Wednesday.

Trump was only a few minutes into his White House speech summarising his just-completed trip to Asia when he bent down to reach for water on a lower shelf of the podium. When he realised that there was no water bottle, he came up to announce: "They don't have water. That's OK."

Soon an aide signalled that there was a bottle to Trump's right when he leaned to grab the bottle. He kept staring forward while he opened the cap and lifted the bottle to take a sip.

The internet would have forgiven him had Trump not hit at Marco Rubio, a Republican senator and his one-time rival for the White House for doing something similar in 2013.

Trump and several others had mocked Rubio for drinking water from a bottle as he delivered a speech rebutting Barack Obama's State of the Union address in 2013.

Trump took to Twitter to say: "Next time Marco Rubio should drink his water from a glass as opposed to a bottle -- would have much less negative impact."

Next time Marco Rubio should drink his water from a glass as opposed to a bottle—would have much less negative impact.

He took a dig at Rubio again last year when he imitated the senator on stage on a campaign trail in February last year and called him a "choke artist" over his water woes.

"Help me, I need water. Help!" Trump mocked, as he held up a bottle of water, took a swig, then casually threw it over his shoulder.

Tables have now turned for Rubio, who tweeted right after the video went viral: "Similar, but needs work on his form. Has to be done in one single motion & eyes should never leave the camera. But not bad for his 1st time."

Similar,but needs work on his form.Has to be done in one single motion & eyes should never leave the camera. But not bad for his 1st time https://t.co/s49JtyRo3S

Trump has a Marco Rubio moment as he reaches for water pic.twitter.com/nsnrk8goEq