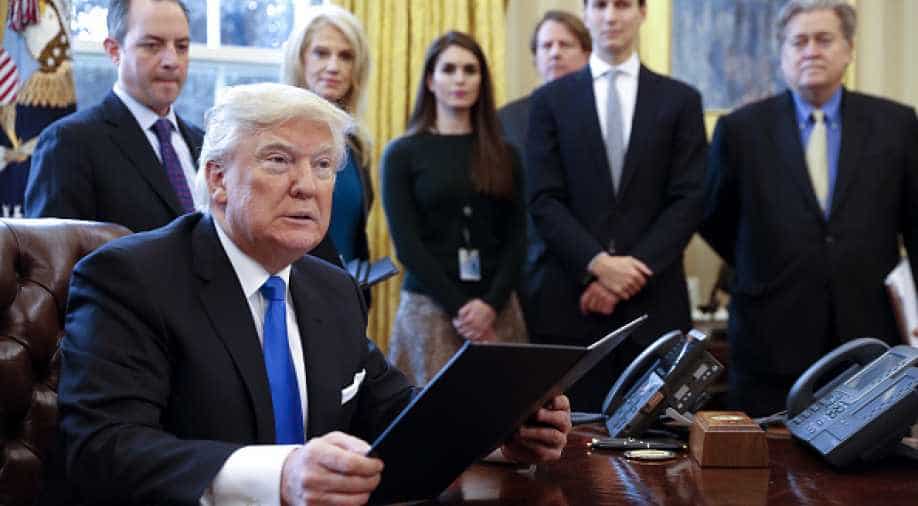 Trump plans to expand the number of customs and border agents, according to CNN. Photograph:( Getty )

United States President Donald Trump has signed an executive order for the building of a wall along the Mexican border, as he looks to fulfill his campaign pledge.

Trump also said that Mexico would reimburse the cost it takes to build the 2,000-mile wall, though earlier he had admitted that getting the Latin American country to pay for the barrier would be "complicated".

Trump's decision is the first in a raft of measures he is expected to taken on border and national security this week. There are talks that he is looking to ban refugess from Muslim-majority countries.

Building of wall along the Mexican border was the centrepiece of Trump's campaign. It was a clarion call for the people which supported him but earned him censure from people both living in the US and abroad for being a "racist" move.

Forty seven per cent of the people support the move while 45 per cent are against it, according to Morning Consult/Politico poll released on Wednesday, undercsoring the controversial nature of the decision.

"A nation without borders is not a nation," Trump said as he visited the Department of Homeland Security to sign two executive orders.

Detractors of the move point out that building the wall would be an expensive mistake. While Trump say it would take $8 billion to build the wall, estimates suggest it would be double of that.

Critics also say the move would prove futile as the flow of unauthorised migrants is already down to near the level of the early 1970s, according to the Washington Office on Latin America.

And how the Trump administration plans to stump out billions of dollars to build the wall is also another stumbling block.

Despite the high octane rhetoric, Trump's action was piecemeal; looking to identify existing funds that could be diverted toward the project.

The Republican-controlled Congress would need to supply billions of dollars more if the wall is to be anywhere near completed.

Trump's party has spent the last decade preaching fiscal prudence, so cuts to existing programs would likely be required.

Trump also ordered a survey of the border to be completed within 180 days.

Much of the land needed to build the wall would have to be seized from private citizens in Texas, the state of Texas or tribal authorities.

That could lead to lengthy legal proceedings, political blowback, and substantial expropriation payments.

Trump has promised that Mexico will pay for the wall, telling ABC they would be reimbursed "absolutely 100 per cent".

"Ultimately it will come out of what's happening with Mexico, we're going to be starting those negotiations relatively soon. And we will be, in a form, reimbursed by Mexico," Trump told ABC earlier Wednesday.

Another threat is to finance the wall by tapping into remittances that Mexican migrants send home, which last year amounted to $25 billion.

Mexican Foreign Minister Luis Videgaray and the country's economy minister are currently in Washington to prepare a visit by President Enrique Pena Nieto scheduled for January 31.

"There are very clear red lines that must be drawn from the start," Economy Minister Ildefonso Guajardo told the Televisa network in Mexico just ahead of the trip.

Asked whether his country would walk away from talks if the wall and remittances are an issue, Guajardo said: "Absolutely."