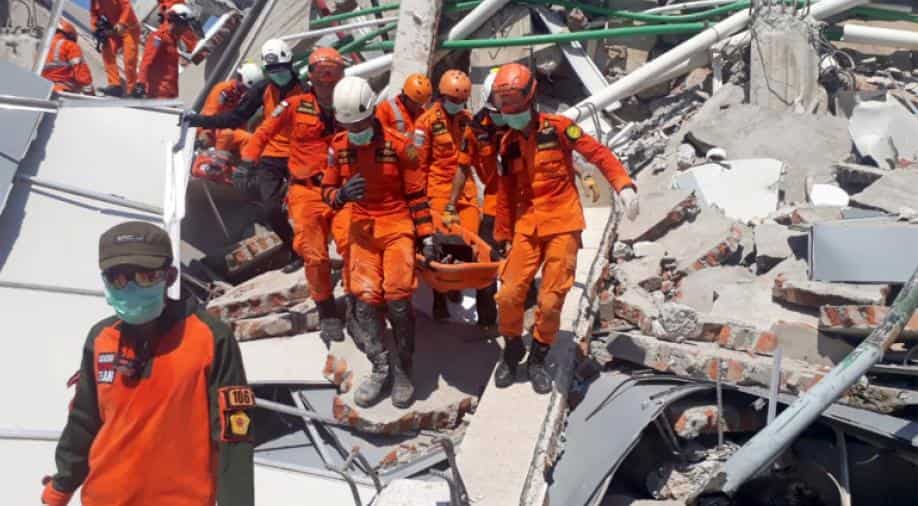 A search and rescue team evacuates a victim from the ruins of the Roa-Roa Hotel in Palu, Central Sulawesi. Photograph:( Reuters )

So precious is fuel that convoys of petrol tankers get an escort.

Hundreds of people swarm an Indonesian state-owned petrol station in the quake-and-tsunami-struck city of Palu, where some would-be customers wait for more than a day to top up the tank.

"I've been here since yesterday, about 26 hours," says Pordawati Pakamundi, as she eyes her goal still several metres away.

"I think I've got around two or three more hours left."

The 56-year-old's aim is to buy five litres (1.3 gallons) of petrol from the Pertamina gas station for her motorbike.

"I've got a motorbike but no petrol," she said. "You can't get water (without a vehicle). You can't cook rice without water."

Along the forecourt floor, a meandering Domino line of jerrycans, water bottles and random containers -- each linked together by twine -- weaves back-and-forth and then across two adjacent car parks.

Each of the 710 vessels is numbered, and at the pump dozens of people had gathered two or three deep to see the conga line of containers filled in turn.

But several police armed with semi-automatic rifles and body armour are a pointed reminder of the tensions and growing desperation in this shattered city of 350,000 on Indonesia's Sulawesi island.

For Palu residents, petrol is a gateway. Without it the hunt for food or water or whatever other essentials are in scarce supply becomes exponentially more difficult.

"This is so I can search for supplies on the motorbike because getting supplies around here is tough," said Bilhan Mow.

"I'm buying one litre and one jerry can -- five litres in total. That's the rule here."

He's frustrated with waiting, but the options are limited.

"There is very little petrol left in my motorbike, it's at an emergency level, even if I go home, I wouldn’t make it, the engine will stop on the way and I would have to push," he says.

"So better for me to wait here for the gas."

Some residents elsewhere in the city have not been so patient, turning to looting in their bid to survive.