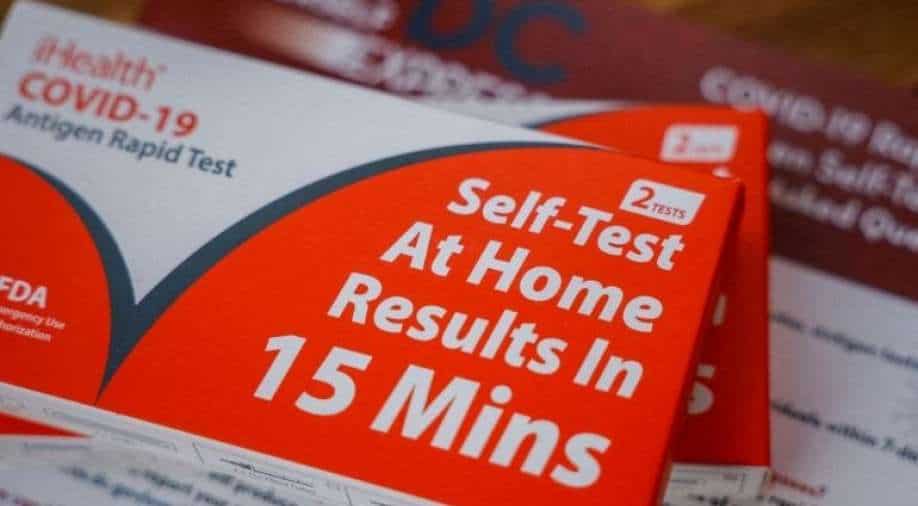 Take-home COVID-19 self testing kits provided by the District of Columbia government, which provides city residents four free take home tests per day, are seen in this illustration Photograph:( Reuters )

The Biden administration said it would send 500 million rapid tests to Americans this month via the U.S. Postal Service after the omicron variant strained access to in-person and at-home tests

Americans have started to receive free coronavirus tests from the U.S. government in the mail after it began accepting orders Tuesday.

The Biden administration said it would send 500 million rapid tests to Americans this month via the U.S. Postal Service after the omicron variant strained access to in-person and at-home tests. Each household is eligible for four free rapid tests and can order them at covidtests.gov.

Marcie Taylor, a marketing consultant in Santa Ana, California, said she received her tests Friday after she ordered them Tuesday at the recommendation of her friend who sent her a link to the website. She said the package, which included two boxes with two tests in each, arrived earlier than the tracking website had estimated.

Taylor said her husband and two children, a 16-year-old and a 20-year-old, would try to make the tests last as long as possible because it only amounted to one test per person.

“If you can order the kit, order it,” Taylor said in an interview. “It gives you peace of mind to have it since there is a shortage at drugstores.”

Taylor was one of several people who posted on social media after they received the tests at the end of the week.

“That bodes well for how things are going to go,” said Steve Hutkins, editor of the “Save the Post Office” blog.

Hutkins said the Postal Service’s mission to deliver 500 million tests in a short period of time was a significant task “but totally doable.”

To make these deliveries, the Postal Service has had to transform its operations.

Though postal workers usually handle packages that are ready to send, to manage the coronavirus test operation, workers are packing and labeling the test kits for delivery, according to a memo between the Postal Service and the American Postal Workers Union.

The government has also updated 43 existing fulfillment centers across the country to be able to prepare the tests, the memo said.

David Partenheimer, a spokesman for the Postal Service, said in an email that to send out the tests, the agency was also using strategies that had helped it deliver 13.2 billion pieces of mail and packages during the 2021 holiday season.

“These strategies, including additional staffing, an investment in new processing equipment and operational efficiencies, and an expanded facility footprint, mean test kits can get to the Americans who want them in a timely and efficient manner,” Partenheimer said.

The operation has not been seamless, however.

Some people who live in apartment buildings said they were unable to place an order on the website when it went live Tuesday.

Jeffrey D. Zients, the White House’s COVID-19 response coordinator, said at a press briefing Friday that this problem affected “a very, very small percent of people who live in apartment buildings” that are not registered as multiunit buildings within the Postal Service’s database. To fix this issue, the Postal Service advised people to file a service request online or to contact the agency’s help desk at 1-800-ASK-USPS (1-800-275-8777).

Zients declined to say how many people had placed orders for the tests but said that the White House would provide that data in the next few days. Nearly 70 million people have visited the test website, according to the government’s digital analytics.

The Biden administration has said a second batch of 500 million tests would be available in the spring.