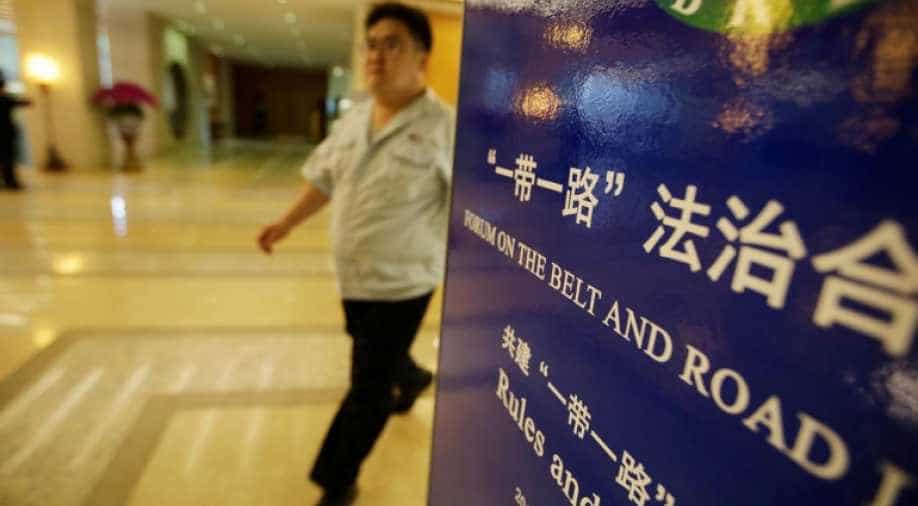 File photo: The sign of an international forum on the "Belt and Road" Legal Cooperation is pictured in Beijing, China July 2, 2018. Photograph:(Reuters)
Follow Us

The 2015 accord enjoins nations to cap temperature rises to "well below" two degrees Celsius (3.6 Fahrenheit) above pre-industrial levels.

Carbon-heavy development in countries part of China's Belt and Road Initiative could render the Paris climate goals unreachable, according to a new analysis on the gargantuan global infrastructure project released Monday.

While the Chinese state is putting up a significant part of the cash, the project will also see other national and private-sector investment, and opponents warn of its devastating environmental impact.

An analysis of the possible carbon footprint of infrastructure development in Belt and Road (BRI) countries said there was a significant risk of the initiative alone producing enough greenhouse gas emissions to derail the Paris climate goals.

The 2015 accord enjoins nations to cap temperature rises to "well below" two degrees Celsius (3.6 Fahrenheit) above pre-industrial levels.

The Tsinghua Center for Finance and Development said that the 126 Belt and Road Initiative (BRI) countries excluding China currently account for 28 per cent of manmade emissions.

It modelled the effects of different approaches to the development of megaports, pipelines, train lines and highways in 17 BRI countries.

It found that countries such as Russia, Iran, Saudi Arabia and Indonesia would need to lower carbon emissions 68 per cent by 2050 compared to current trajectories in order to keep the world on course to 2C of warming.

"We have a business-as-usual scenario that says if you continue the way you are then even if every other country on the planet — which includes US, Europe, China and India — goes on a 2C pathway, this is still going to blow the carbon budget," said Simon Zadek, senior visiting fellow at the Tsinghua Center.

"The BRI growth dynamic is so large that if you get the carbon (emissions) wrong in a way it doesn't matter anymore what anyone else does."

The report said emissions by 2050 from all BRI countries could be 39 per cent lower if they followed industrial "best practice" by employing greener technology.

China — the world's top carbon polluter — currently produces around 30 per cent of manmade CO2, although on a per capita basis its emissions are roughly on a par with Europe.

Beijing has been praised with taking strong action on domestic air pollution but has come in for criticism for its fossil fuel investment outside of China.

Zadek said that China needed to have "policy consistency" with regards to emissions, both at home and abroad in BRI nations.

The United Nations estimates that two-thirds of the world's 2050 infrastructure has yet to be built.

Zadek said the BRI was an opportunity for the world to decarbonise while expanding trade and growth opportunities.

He suggested establishing an international platform to support green finance initiatives across BRI countries, as well as applying mandatory environmental assessments for Chinese investments in the project.
"Is it easy? Can we do it by tomorrow morning by 9 o'clock? Of course not," he said.

"But we've taken care to set out what each pathway would look like. It can be done."

The Tsinghua analysis was co-authored by Vivid Economics and the ClimateWorks Foundation.