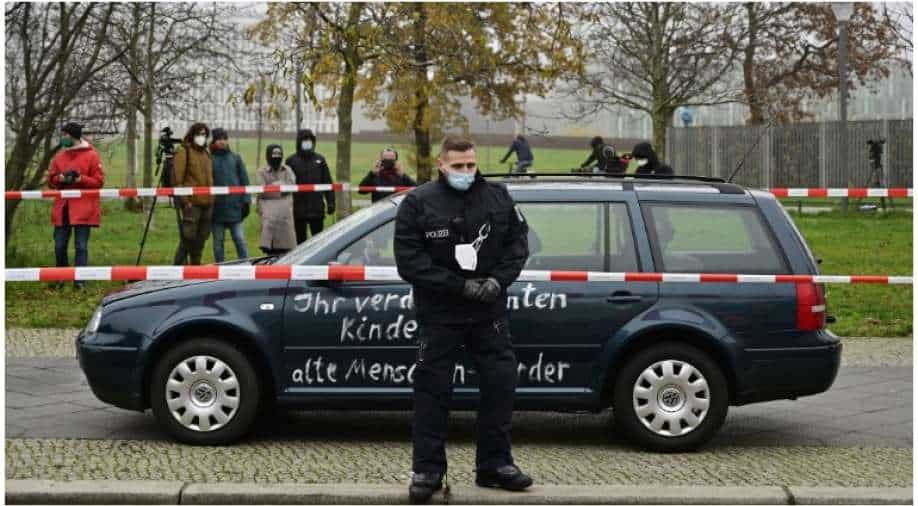 A policeman guards a car with the lettering 'You damned children- and old-people murderers' painted on its doors after it drove into the gate of the German Chancellery and was removed by police, in central Berlin on November 25, 2020. Photograph:( AFP )

At the moment, the Berlin Police are not suspecting that this was an extremist attack

A car crashed into a gate outside German Chancellor Angela Merkel's office. The driver couldn't get past the barrier and was detained. He is being questioned but the motive remains unclear. There are no report of casualties.

At the moment, the Berlin Police are not suspecting that this was an extremist attack.

However, there were some words scrawled on the sides of the car and these words have been a matter of concern for security agencies. The messages are 'stop globalisation politics' and 'you damn killer of children and old people'. The pictures of these slogans are going viral on the internet.

The timing of the attack has also made the police concerned. The attack took place right before Merkel was scheduled to host a video conference of German state premiers regarding a potential extension of coronavirus lockdown. More investigation is underway.

Germany was in news for another development on Wednesday. German Chancellor Angela Merkel on Wednesday approved compensation for gay soldiers who faced discrimination in the armed forces until a change of policy in 2000.

Earlier, German Defense Minister Annegret Kramp-Karrenbauer said “I very much regret the practice of discrimination against homosexuals in the Bundeswehr, which stood for the policy of that time. “I apologise to those who suffered because of it.”

Under the proposed law, which needs to be approved by parliament, soldiers who were convicted by military courts for being gay, demoted, or who otherwise saw their careers damaged because of their sexual orientation, would receive a "symbolic amount" of 3,000 euros ($3,500).