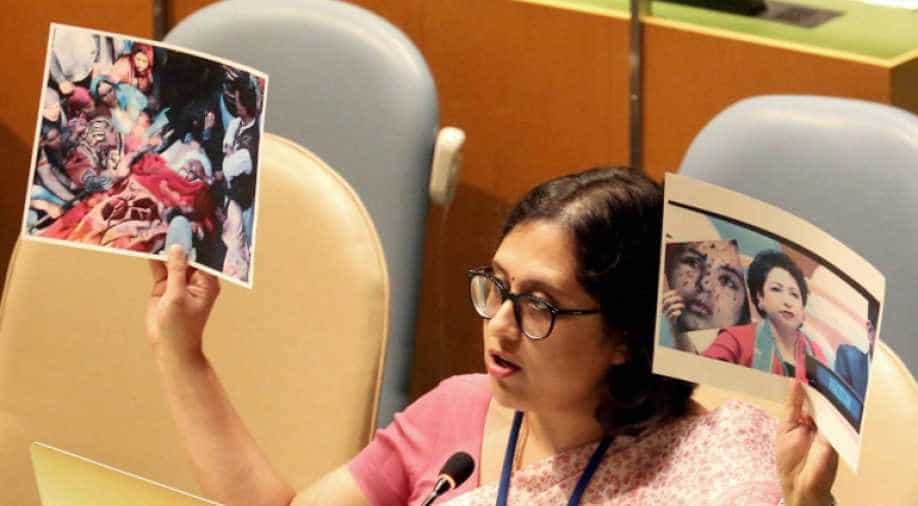 Paulomi Tripathi, Permanent Mission of India to UN reply to Pakistan at UNGA with real picture of Pak-sponsored terrorism in J&K, during the 72nd United Nations General Assembly (UNGA) in New York on Monday. Photograph:( PTI )

In her right to reply at the UN, the Indian diplomat said the "permanent representative of Pakistan callously held picture of an injured girl which was actually a picture of Rawya abu Jom from Palestine". ||

In her right to reply at the UN, the Indian diplomat said the "permanent representative of Pakistan callously held picture of an injured girl which was actually a picture of Rawya abu Jom from Palestine".

"We are constrained to show a photo that reflects real picture of pain inflicted by nefarious designs of Pakistan on India," the Indian diplomat said.

"This is a real picture, of Lt Ummer Fayaz, a young officer from J&K. He was brutally tortured and killed by Pakistan supported terrorists," Paulomi Tripathi said while holding out the picture of the officer.

"This is the reality that Permanent Representative of Pakistan (Maleeha Lodhi) sought to obfuscate," Paulomi Tripathi said.

"Pakistan misled the assembly by displaying the picture to spread falsehoods about India. Fake picture to push a completely false narrative," she added.

On Sunday, Pakistan's Ambassador to the United Nations Maleeha Lodhi in her right to reply to External Affairs Minister Sushma Swaraj's speech at the UN showed pictures of Palestinian victims and said they were "evidence" of atrocities on Kashmiris.

Maleeha Lodhi waved dramatic pictures of a girl with pellet injuries on her face and added, "this was the face of Indian democracy", while suggesting that Kashmiris had been injured by pellet guns.

However, upon closer inspection of the picture, Maleeha Lodhi's claim seemed to have boomeranged on her.

The picture used by Pakistan's Ambassador to the UN was reported by a number of media outlets as that of Rawia Abu Joma'a, a 17-year-old girl injured in Israeli airstrikes on Gaza city in 2014.