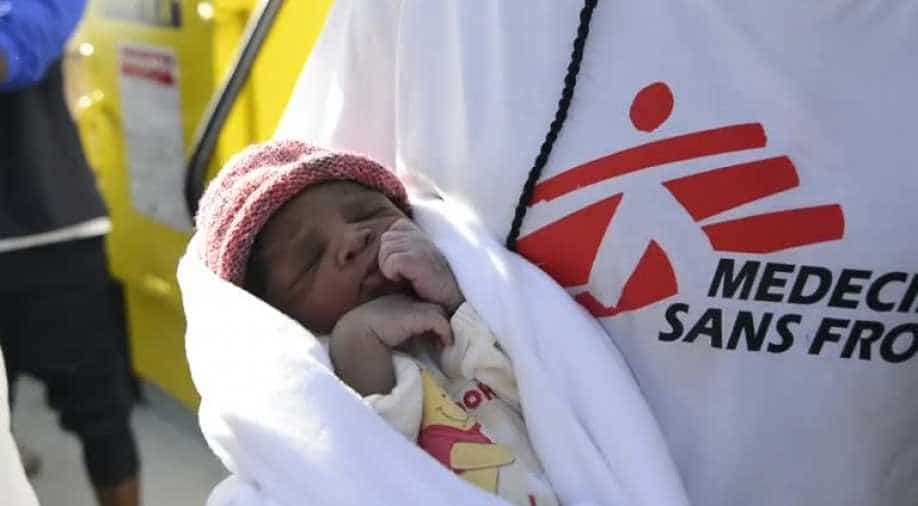 Miracle, weighing 2.8 kg, was the sixth baby born on the rescue ship, but the first this year. Photograph:( Reuters )

A baby boy named Miracle has been born on board a humanitarian ship - a bright spot as the tide of migrants risking sea crossings from Libya to Italy has increased as the weather has improved.

There have been more than 1,800 migrants rescued by humanitarian ships, and Italy's navy and coastguard vessels over the past three days, and one body was recovered, an Italian coastguard official said.

Arrivals from Libya, a staging post for people smugglers, have plummeted 85 per cent this year from last as Italy provided support to the Libyan coastguard and to municipalities along the coast to stop migrant boats.

But good weather or other factors seem to have reversed that trend, for now.

"It's really hard to know what's happening inside Libya, or why the Libyan coastguard has not been so active in these last few days," said Lauren King, a spokeswoman from the Aquarius, the ship baby Miracle was born aboard.

The Aquarius is a rescue ship run by SOS Mediterranee and Doctors without Borders (MSF), which brought ashore 70 migrants in Catania, Sicily, on Sunday. The Aquarius is setting off again later in the day for the waters off the coast of Libya.

"Given the weather conditions ... It's better we're out there and ready," she said.

On Saturday, the leader of the far-right League party, which appears poised to form a coalition government with the anti-establishment 5-Star Movement, said that the surge in arrivals meant someone was trying to undermine the would-be administration.

"The usual powers that be are threatening us with the migrant boats," Matteo Salvini Tweeted.

The League has promised to take a hard line on irregular immigration and deport hundreds of thousands of migrants if the government receives the president's endorsement and wins parliament's backing.

Migrants rescued by the Aquarius spoke of horrific conditions and violence in Libya, including the mother of the baby born on Saturday.

"Both the mother and baby are doing very well," Amoin Soulemane, the midwife on the Aquarius, said in a statement. Miracle, weighing 2.8 kg, was the sixth baby born on the rescue ship, but the first this year, King said.

When Miracle was brought onto deck by the midwife, the migrants on board celebrated his birth by singing and dancing -- a far cry from the conditions they said they had came from in Libya.

The mother, whose name was not given, told MSF she had been "held captive, beaten, given very little food and extorted for money for release" during the year she was in Libya.

She was eventually able to escape from her captors, and on Thursday she set out to sea on a rubber boat with 68 others.