At least 53 migrants killed, 58 injured in a cargo truck accident in southern Mexico 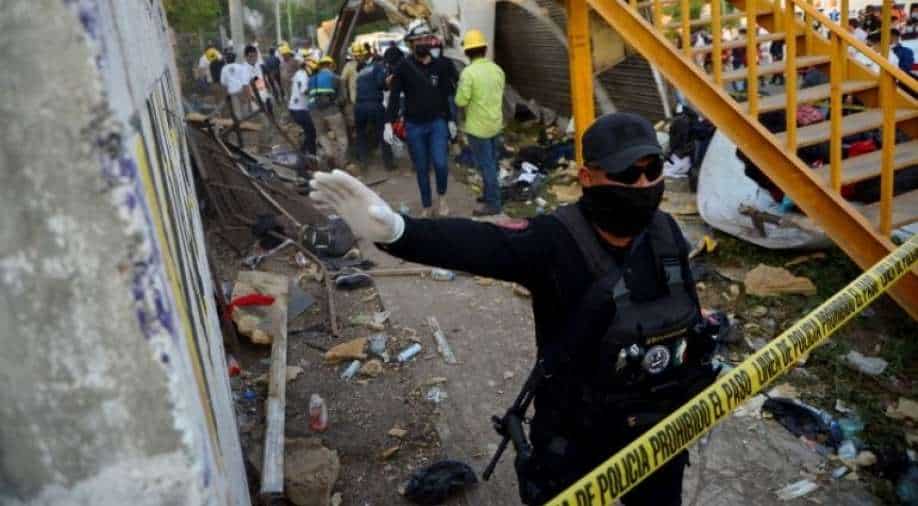 A police officer raises his arm to block photographers to to avoid taking pictures at the site of a trailer accident that left at least 49 people dead, most of them migrants from Central America, in Tuxtla Gutierrez, in Chiapas state, Mexico December 9, 2021. Photograph:( Reuters )

A cargo truck jammed with people who appeared to be Central American migrants rolled over and crashed into a pedestrian bridge over on a highway in southern Mexico on Thursday, killing at least 53 people and injuring nearly five dozen others, authorities reported.

At least 53 people were killed and many more were injured in a tragic truck accident in southern Mexico on Thursday, with the majority of the fatalities believed to be Central American migrants.

According to the chief of the state Civil Protection Service, Luis Manuel Garca, the disaster occurred when a truck carrying more than 100 people toppled on Thursday afternoon near Tuxtla Gutiérrez, the capital, in southern Chiapas state.

With at least three individuals critically injured, the death toll could grow. The tragedy is one of the deadliest involving migrants in decades, and it comes after a car collision on the US-Mexico border killed 13 migrants in March.

Freight trucks transporting so many individuals in migrant-smuggling operations in southern Mexico are not uncommon.

The accident occurred on a highway going to Tuxtla Gutiérrez, the state capital of Chiapas.

Victims were strewn across the pavement and inside the truck's freight compartment, according to photos taken at the scene.

The victims seemed to be Central American immigrants, but their nationalities were not confirmed.

Mexican officials have attempted to stop migrants from marching in large groups toward the US border in recent months, but migrant smuggling has continued clandestinely and illegally.

Watch | US strikes agreement with Mexico, Honduras and Gautemala to secure borders

In one of the greatest busts in recent memory, authorities in the northern border state of Tamaulipas discovered 652 mostly Central American migrants crowded into a convoy of six freight trucks moving toward the US border in October.

Migrants who are involved in major accidents are frequently allowed to remain in Mexico, at least temporarily, because they are both witnesses and victims of crimes.