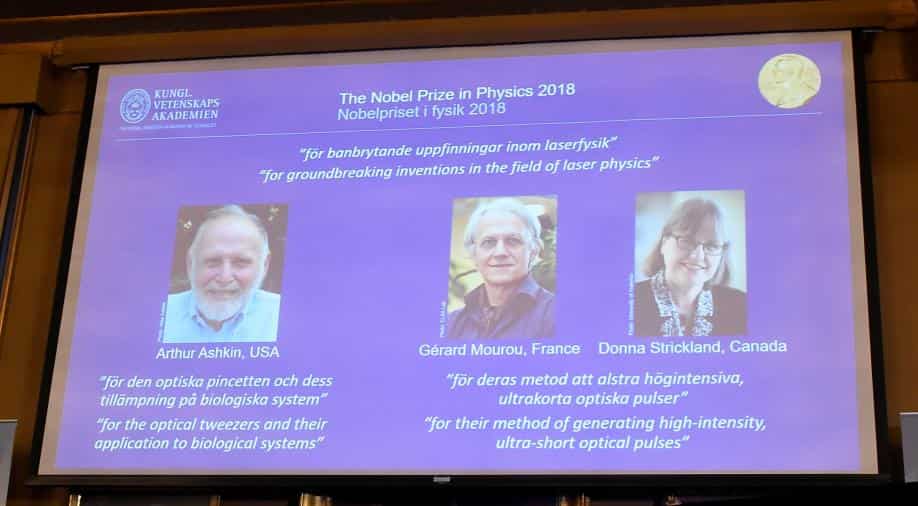 Arthur Ashkin of the US won one half of the prize, while Gerard Mourou of France and Donna Strickland of Canada shared the other half.

Three researchers on Tuesday shared the Nobel Physics Prize for inventions in the field of laser physics which have paved the way for advanced precision instruments used in industry and medicine, the jury said.

Arthur Ashkin in the US, Gérard Morou in France, and Donna Strickland in Canada will share the 9m Swedish kronor (£770,000) prize announced by the Royal Swedish Academy of Sciences in Stockholm on Tuesday.

The Royal Swedish Academy of Sciences has decided to award the Nobel Prize in Physics 2018 “for groundbreaking inventions in the field of laser physics” with one half to Arthur Ashkin and the other half jointly to Gérard Mourou and Donna Strickland: The Nobel Prize pic.twitter.com/M9VJwW4Ih6

Arthur Ashkin of the United States won one half of the prize, while Gerard Mourou of France and Donna Strickland of Canada shared the other half.

On Monday, James Allison at Texas MD Anderson Cancer Center in Houston and Tasuku Honjo at the University of Kyoto won the 2018 medicine Nobel for their work on harnessing the immune system to combat cancer.