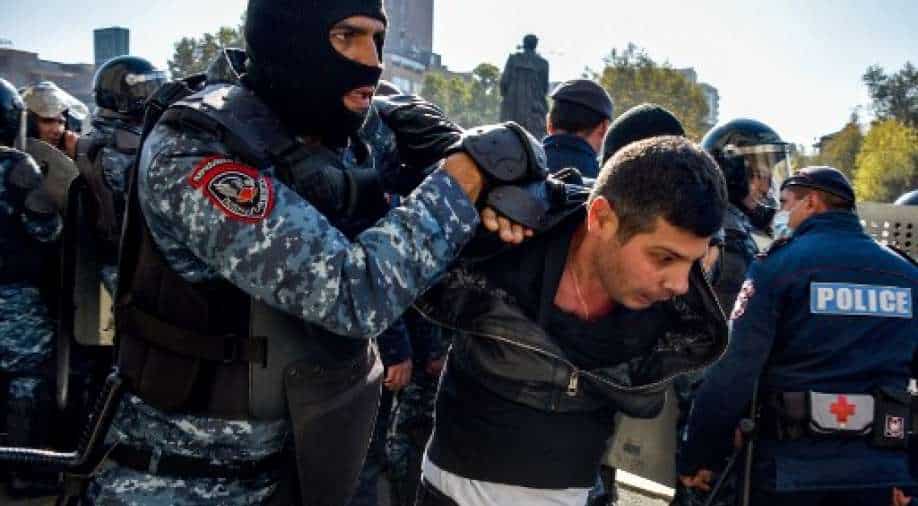 Protests in Armenia over peace deal with Azerbaijan Photograph:( AFP )

Fighting between Azerbaijan and Armenia erupted on September 27 as the Minsk group comprising of Russia, United States and France intervened to stop the fighting.

As the Armenia-Azerbaijan peace deal came into force, the Armenian government today arrested at least 10 opposition leaders for their role in anti-government protests as public anger over the Nagorno-Karabakh agreement boiled over into the streets.

PM Nikol Pashinyan had announced the Nagorno-Karabakh peace deal on Tuesday which indicated clear gains of Azerbaijan which was taken up by demonstrators at home. Under the deal, Armenia agreed to cede parts of the disputed region to Azerbaijan as it sparked public anger.

Also Read: Armenia and Azerbaijan agree on a deal with Russia to end conflict

People came out on the streets to demand PM Pashinyan's resignation over the Nagorno-Karabakh agreement in Yerevan even as several opposition leaders were arrested by government forces.

Fighting between Azerbaijan and ver Nagorno-Karabakh had erupted on September 27 as the Minsk group comprising of Russia, United States and France intervened to stop the fighting.

Russia was able to broker a peace deal after Armenian and Azerbaijan ministers had met in Russia but both sides opened fire on the ground just hours after the ceasefire agreement.

Both sides engaged in sporadic shelling throughout the month as Russian President Putin seen as a close ally of Azerbaijan sought to broker peace between the two warring sides once again. Azerbaijan is a close ally of Turkey from whom it had bought drones during the conflict with Azerbaijan.

Meanwhile, Turkey's foreign minister Mevlut Cavusoglu said that a Russian delegation will visit Turkey to discuss the creation of a joint centre for monitoring the peace deal.

Russian peacekeepers set out for the region on Wednesday as the country prepared to send military personnel and armoured personnel carriers as part of the peacekeeping mission.