Anti-China protests erupt in Mongolia ahead of Mike Pompeo's visit 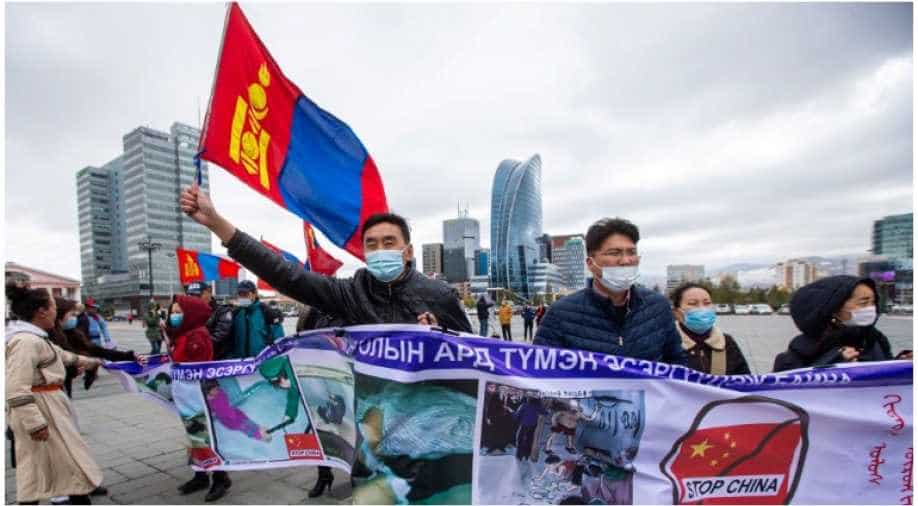 Protestors hold banners and wave the Mongolian flag during a protest in Ulaanbaatar, the capital of Mongolia, against Chinese policies in the neighbouring Chinese province of Inner Mongolia on October 1, 2020. Photograph:( AFP )

Mongolians took to streets just ahead of US Secretary of State Mike Pompeo's visit to the country. On Thursday, dozens of protesters demanded release of ethnic Mongolian arrested in China. The protests took place in Mongolian capital of Ulaanbaatar.

US Secretary of State Mike Pompeo will visit Mongolia next week during his Asia tour. His Asia tour includes a visit to Japan and South Korea but not China.

Some of the protesters on Thursday wore facemasks as a precaution against the coronavirus -- were dressed in traditional Mongolian outfits and carried banners showing pictures of alleged Chinese atrocities against ethnic Mongolians.
Pompeo has previously criticised China's coercive attempts to assimilate local minorities into the dominant Han population.

Ethnic Mongolians in China and elsewhere fear the move -- which limits the opportunity to use Mongolian in schools -- will lead to the language's extinction.

"During the Wang Yi's visit Mongolian leadership should have spoken up and stated that China must release the arrested Inner Mongolians," protester Elbegdorj told AFP.

Rallies in Inner Mongolia last month were the largest seen for decades, but a crackdown was swift, with armoured vehicles surrounding schools in some areas.

Police also offered cash bounties for leads on ringleaders and publicised the arrests of dozens of suspects accused of gathering signatures and sharing dissenting messages on WeChat.

The clampdown echoes Beijing's moves in Xinjiang and Tibet, where similar policies to assimilate local minorities into the dominant Han population were implemented in line with Xi's vision of national and ideological unity through cultural identity.

"China is violating those rights."