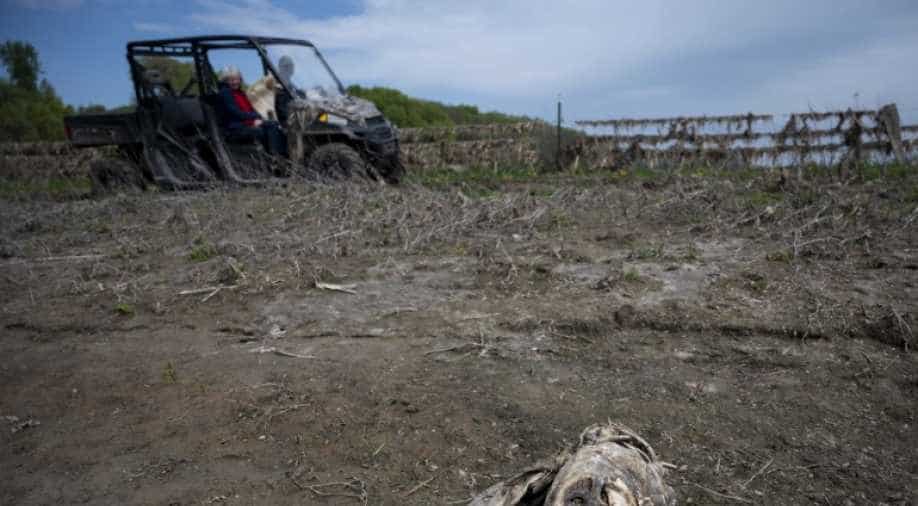 Damage from the March rains in the Midwest is visible across the landscape north of Omaha, the state's biggest city: trees have fallen, growing fields are caked in mud and rivers are at elevated levels.

Already hurt by the US-China trade war, farmers in Nebraska are reeling from this year's devastating floods, which ravaged crops and left little time to plant for the next harvest.

Damage from the March rains in the Midwest is visible across the landscape north of Omaha, the state's biggest city, trees have fallen, growing fields are caked in mud and rivers are at elevated levels.

Cows are visible in some pastures but many breeders are still tallying their losses. Some animals died in the floods and others perished after being sickened by bad water.

"I know people who lost a lot of their animals because they were stranded in the floods," said Jim Dinklage, a farmer in Orchard, about three hours from Omaha. "You couldn't have access to them."

Of Nebraska's 93 counties, 81 have declared states of emergency, said Steve Wellman, director of the Nebraska Department of Agriculture.

"So 85 per cent of the state of Nebraska has been impacted by either flooding or blizzard conditions from the middle of March," he said.

Damages are estimated at more than $800 million, about $400 million in the livestock industry and $440 million in crops.

Among the 50 states, Nebraska is the third-biggest corn producer and second-biggest ethanol producer.

One out of four jobs is tied to farming, the state's biggest sector.

In Scribner, north of Omaha, Ruth and Sid Ready describe a closing window of opportunity for the season.

Corn is usually planted from mid-April through May, while soybeans are sown through July 1.

"It's not like we've got a lot of alternatives out here. You either get your crop in the spring, or you are out of income for the entire year," said Ruth Ready, adding that the floods shrank this season's usable acreage, threatening the next harvest.

The couple, who also raise cows, estimate the rains will effectively double the costs in the Nebraska farm belt this year.

Clare and Gayle Duda, corn and soy farmers in nearby Ponca Hills, said they were facing a similar situation.

"We planted 300 acres and we were only able to harvest five acres," or just two hectares, said Clare, adding that losses were hard to bear without revenue to make up for the investment in the crop.

Flood waters had pooled in the middle of the Dudas' corn field, splitting it in two and cutting off access to much of the crops, consigning them to ruin.

A church donation paid for antibiotics to treat E.coli infections in their goats, but the bacteria is also now present in mushrooms on the property.

"We should be out planting today but because the river flooded, the soil gets so saturated, so wet, that we can't," said a forlorn Clare.

Growers have fixed costs on land and machinery that do not lessen even if the output is lower. In many cases, farmers already purchased seeds for the season. Plus, transport costs have essentially doubled due to the dismal state of the roads.

But there is a more fundamental hit to the region's economic capacity, with nutrient-rich soil developed over generations suddenly stripped away.

After taking stock of the damage, the Dudas concede the reality of climate change.

"I accept it," Clare said of the warming climate.

Emergency calls from farmers to a hotline run by Interchurch Ministries of Nebraska have doubled over the last year.

In the wake of the disaster, growers have been granted extensions on credit payments and loans, as well as the possibility in some cases to renegotiate loans at lower interest rates.

The floods came as farm incomes have fallen about 50 per cent since 2013 due to low crop prices, leading to debt levels not seen since the 1980s.

The situation has also been exacerbated by the trade war with China, which has closed off a key consumer market for some growers, particularly for soybeans.

The Ready family sells both soybeans and corn to China. But they are sticking with President Donald Trump.

"It was our products that are most affected by that trade war," Sid Ready said.

"Does that mean that we are all very happy about it because it's costing us?" he added. "No, but we understand it."