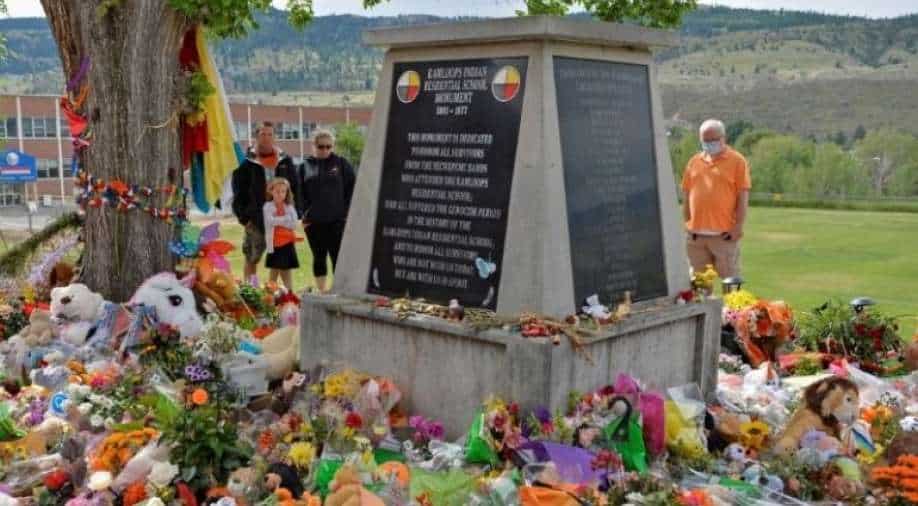 People visit a makeshift memorial on the grounds of the former Kamloops Indian Residential School, after the Tk'emlups te Secwepemc band council encouraged mourners to take part in a national day of prayer to honour the remains of 215 children that were found at the site in Kamloops, British Columbia, Canada Photograph:( Reuters )

The discovery of the remains of 215 children at a former residential school in Canada has reopened wounds for survivors of the system, they said, as the government pledged to spend previously promised money to search for more unmarked graves

Ontario announced Tuesday Can$10 million (US$8 million) to search for and look after unmarked graves of indigenous residential school students in the Canadian province, after burials were discovered elsewhere in the country.

"Like all Ontarians, I was heartbroken by the tragic news that a burial site was found at a former residential school in Kamloops, British Columbia," Ontario Premier Doug Ford told a news conference.

"We grieve for the 215 children that lost their lives (in Kamloops), as well as their families and the communities that they were taken from," Ford said.

"This is a moment to recognize the painful legacy of Canada's residential school system, and of the damaging lasting effects it has had on survivors and indigenous communities."

The discovery of the remains of 215 children at a former residential school in Canada has reopened wounds for survivors of the system, they said, as the government pledged to spend previously promised money to search for more unmarked graves.

The Tk'emlúps te Secwépemc indigenous nation in British Columbia announced last week it had found the remains of 215 children, some as young as three, buried at the site of the Kamloops Indian Residential School, once Canada's largest such school.

Between 1831 and 1996, Canada's residential school system forcibly separated about 150,000 children from their homes and subjected them to abuse, rape and malnutrition at schools across the country in what the Truth and Reconciliation Commission in 2015 called "cultural genocide."

Run by the government and church groups, the schools' stated aim was to assimilate indigenous children.

Amid growing outrage, the federal government said on Wednesday it will urgently disburse money promised two years ago to indigenous communities that want to search former school sites for the remains of children.

The British Columbia coroner is working with the Tk'emlups te Secwepemc tribe to identify the remains and causes of deaths of the 215 pupils at the Kamloops school, while pressure is mounting on the Oblates of Mary Immaculate who ran the school on behalf of the federal government to release their records.

In 2019, the government promised C$33.8 million ($28.1 million) over three years to support, among other things, locating the bodies of children who attended the schools. Of that, C$27.1 million has yet to be spent.